There are a plethora of hashtags related to love or relationship goals. But, do those of the emerging generation of Koreans really want a relationship, or just the feelings of butterflies in the stomach without the serious commitment?

While Facebook, Instagram and online dating apps are popular, KakaoTalk, the country’s most popular mobile messenger with some 40 million users, is the prime battlefield of love.

On subways, on the streets and at home, young Koreans are seen occupied, heads down, typing away on their smartphones. Some would say there is some kind of “instant gratification” upon seeing a notification pop up on the screen, 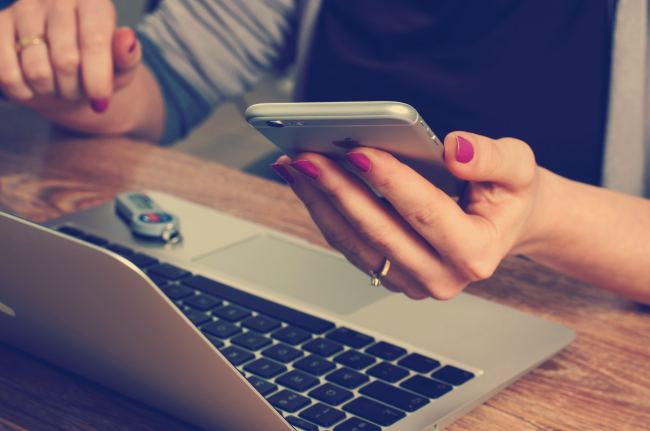 (William Iven/Unsplash)
The flirting, teasing and rosy promises via KakaoTalk continue to attract a growing number of young Koreans, as love has indeed gone digital for the younger generation. Called a “sseom” relationship, anyone from teenagers to 20- and 30-somethings have started to mimic what could be perceived as an “open relationship” on Facebook, though without publicly acknowledging it on social media.

The relationship does not carry the same obligations of a boyfriend-girlfriend relationship, but is perceived as “more serious than a one-night stand,” according to college student Lee Ji-soo.

Lee, 25, is among a fast-expanding group of Koreans who has had experience meeting a partner online, then flirting using a method called “mildang” in Korean, which is something akin to a “tug-of-war” relationship, via KakaoTalk.

To those who have never used the mobile messenger, users can check to see whether the other person has read the message or not from the “1” that disappears once read.

As Koreans ride the wave of sseom relationships, the extent to which a person is able to pull off mildang strategies using KakaoTalk-specific features can change the power dynamics in the budding relationship. 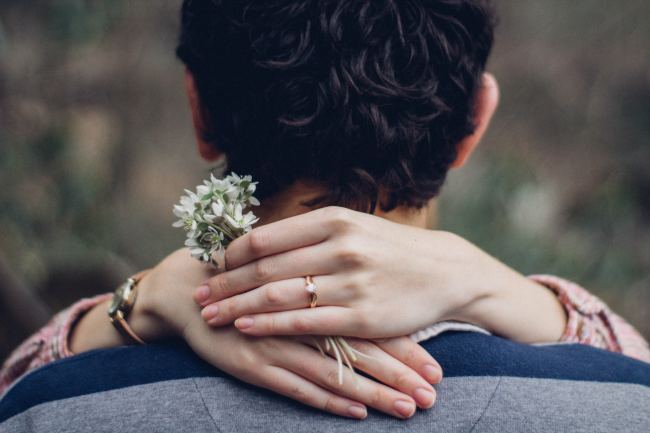 (Joshua Rodriguez/Unsplash)
“Meeting someone face-to-face for the first time, like in the old days when our parents went on ‘sogaeting’ takes too much time. I can instantly go on Instagram and DM (direct message) someone that can potentially become my girlfriend or ‘sseom,’” Kim Jin-soo, a college student, said.

“Sogaeting,” a Korean tradition of blind dates arranged by an acquaintance, is seemingly done more efficiently now as people sift through Instagram accounts.

Kim prefers flirting online over the occasional offline date. After getting a KakaoTalk ID, he believes it is of utmost important to stay “on top of the game.”

When talking through KakaoTalk, Koreans focus on the time interval between messages. Many users deliberately reply late to keep their partners hanging -- and keep the upper hand.

Lim Kyeong-hee, 23, a college student in Seoul, shared that many times she would purposefully reply late to keep “tension” high.

“Sometimes, I only read the pop-up message on my phone, then send a reply 10 minutes later. I don’t want to look like I was waiting for his message all day,” Lim said. 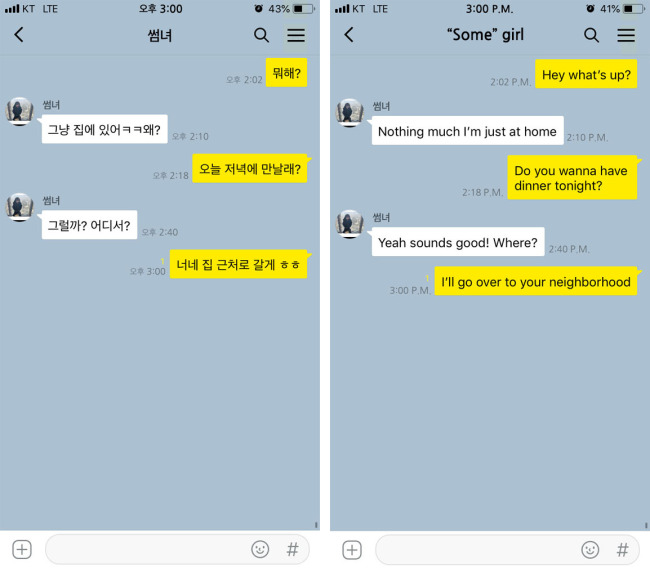 A simulated KakaoTalk conversation occurs between two people in a “sseom” relationship.
Some control their reply times depending on their partner-cum-adversary. If a reply comes after an hour, then so too will the response to that.

Visual signs also matter on such online communications for romance. Messenger apps have a variety of emoticons these days and couples make full use of them as they pull off subtle tactical moves. Certain emoticons seem to be more effective than others in revealing personal feelings. 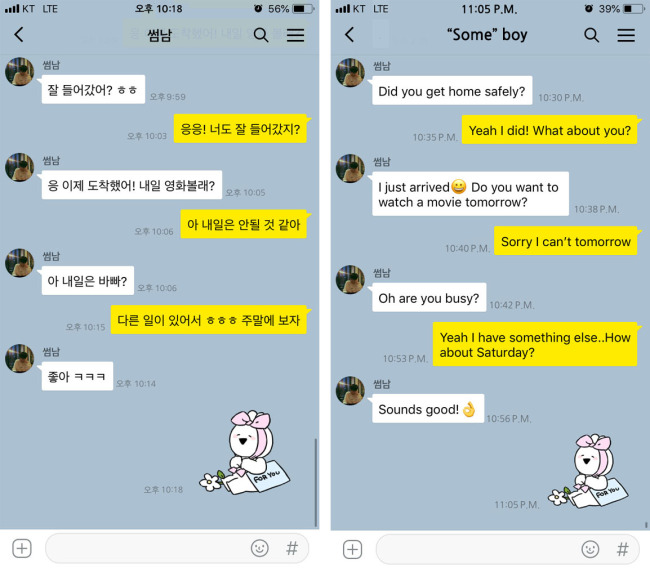 A simulated KakaoTalk conversation occurs between two people in a “sseom” relationship.
“I sometimes unexpectedly send cute emoticons to my ‘sseom man’ that I would not necessarily send to my friends,” said 23-year-old college student Yang Min-ah.

While it is a way to flirt through text and show the depth of emotion, Yang explained it is important to know when to use the emoticons and not bombard the conversation.

The mobile tug-of-war also occurs when one sends the first KakaoTalk message to open up a conversation. Couple-wannabes tend to avoid sending the first message when they are just getting to know each other. 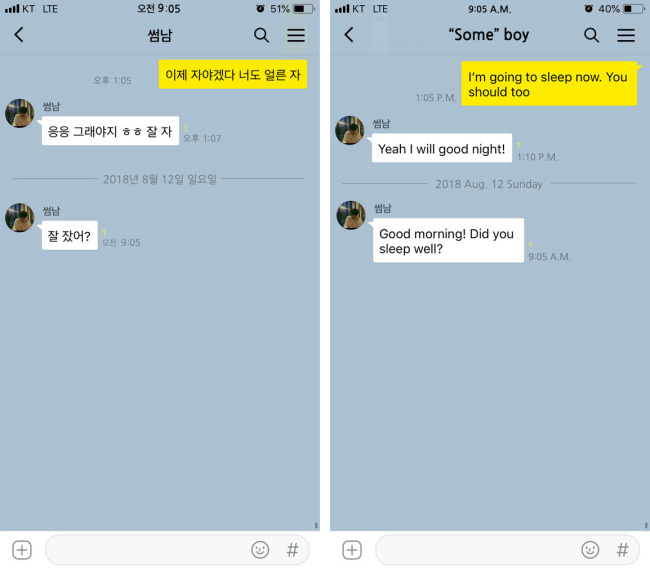 A simulated KakaoTalk conversation occurs between two people in a “sseom” relationship.
“I don’t like to give the impression that I have already fallen for the guy,” said Lim. Sometimes, she would deliberately avoid replying to a message until the next morning to keep the conversation going and avoid having to start up a new conversation herself.

Even after couples decide to formally label their relationship as “boyfriend-girlfriend,” the electrifying tension continues through the mobile messenger. Some purposefully employ Instagram or Facebook to make their partners jealous.

The online dating scene has also seen a rapid growth in recent years. The value of the domestic online dating industry is now estimated at 70 billion won ($62 million), according to a 2017 study released by Hongik University in Seoul.

As of July, around 920,000 Koreans were seeking to find romantic partners through mobile dating apps, of which 81 percent were men and 62 percent were in their 20s or 30s, according to market research firm Nielsen Korea. 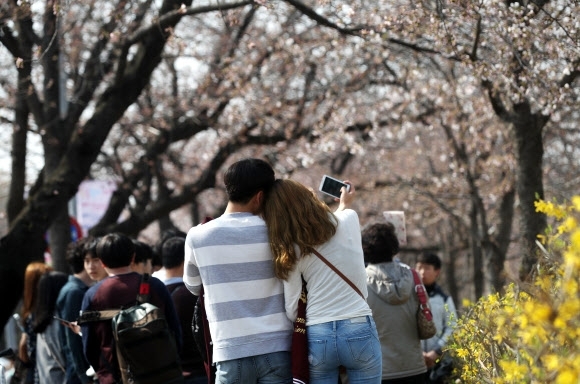 (Yonhap)
More recently, Azar has emerged as the dating app preferred by the younger crowd, coming in No. 3 on the app store chart. Even though it is described as a mobile messaging app, it is also considered a dating app for Korean users since its main feature allows for meeting random people via video chat.

Tinder, now available in 196 countries, made its debut in the Korean market in 2015. Boasting its success at making over 20 billion matches globally, the Los Angeles-based app, however, has yet to see the same level of enthusiastic adoption in the Korean market, according to the company.

Jeon Hye-in, 19, a high school student in Gangneung, Gangwon Province, said that Instagram DM is popular among her friends for meeting new people, especially of the opposite sex.

“Because I live quite far away from the capital city of Seoul, I think Instagram helps me connect and meet new people quite easily,” Jeon said.

“There’s an expression that goes like ‘You can slide into someone’s DM,’” she said.