In 1994, such warm nights continued for 24 consecutive days, from July 17 to Aug. 9. This year, Seoul residents have been experiencing unusually warm weather every single night since July 22. 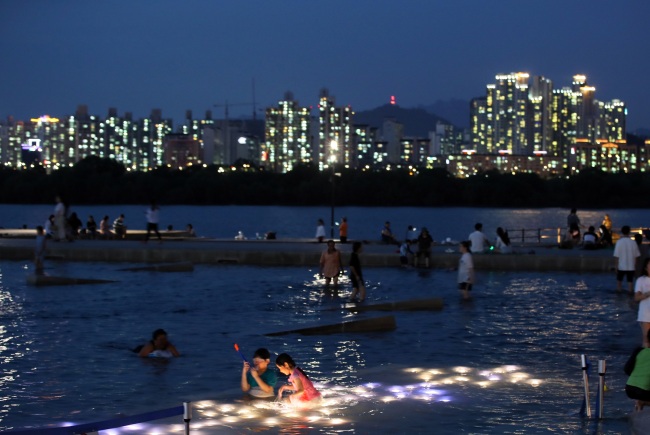 Seoul residents spend time by the Han River at night amid the ongoing heat wave. (Yonhap)
The capital city’s nighttime temperature hit a record high on Aug. 2, reaching 30. 4 degrees Celsius, marking the highest nighttime low since the government began recording weather data in 1907. The night of Aug. 2 is now recorded as the warmest night in Seoul in 111 years.

This year’s heat wave, which began in mid-July, is considered one of the most severe heat waves in Korean history. On Aug. 1, the country sizzled to its highest-ever temperature of 40.7 degrees Celsius.

According to the Health Ministry, at least 4,000 Koreans have been medically treated for heat-related illnesses this year, as of Tuesday morning. Among them, 48 have lost their lives, including at least five outdoor workers.

Those aged 65 or older accounted for 31.8 percent of all Koreans who sought medical attention after being exposed to heat.

The ongoing heat wave, as well as the tropical nights, will “continue indefinitely” except in the Yeongdong region of the Gangwon Province, weather authorities said.