[ The Korea Herald – Send E-mail ]
Typhoon Leepi unlikely to affect Korean Peninsula, heat wave expected to continue
By Yonhap
Published : Aug 12, 2018 - 10:38
Updated : Aug 12, 2018 - 10:38
Typhoon Leepi, the 15th one of the year and formed 810 kilometers north of Guam around 3 a.m. on Sunday, is expected to keep moving northwest and is unlikely to affect the Korean Peninsula, the national weather agency said Sunday.

With a pressure of 998 hectopascals, it is a small typhoon and expected to become a tropical low pressure system when it reaches some 740 kilometers off the southeast coast of Japan's Kagoshima Prefecture around 3 a.m. on Tuesday. 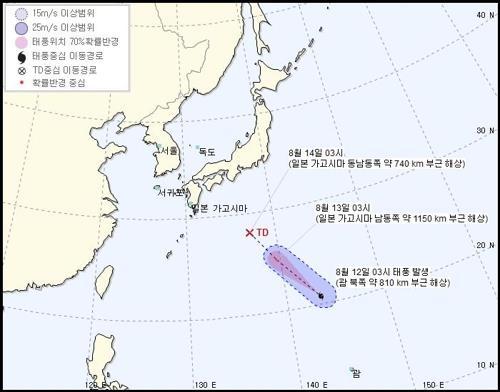 Korea has been suffering from record high temperatures over the last few weeks and is in much need of rainfall that will cool it down. (Yonhap)