[ The Korea Herald – Send E-mail ]
Man’s body found in house next to Seoul mayor’s temporary residence
By Claire Lee
Published : Aug 8, 2018 - 16:07
Updated : Aug 8, 2018 - 19:42
A man’s body, which had seemingly remained unnoticed for a significant period of time after his death, was found Wednesday in a house next to Seoul Mayor Park Won-soon’s temporary residence in northern Seoul -- in an unexpected twist to the mayor’s effort to “experience” everyday reality in one of Seoul’s poorest districts.

The Seoul mayor moved into his current temporary residence -- a two-room rooftop dwelling without air conditioning -- on July 22 to feel "what it really means to live in one of the worst types of housing in Seoul." Too warm in the summer and too cold in the winter, rooftop dwellings are considered among the cheapest -- and arguably least safe -- places to live in the city. Meanwhile, Gangbuk-gu, where the home is located, is also one of the four poorest districts in the South Korean capital.

A case of “godoksa” -- the phenomenon of someone dying alone without anyone noticing --, the man’s body was discovered by police in his house on Wednesday morning, after a neighbor noticed an odor from outside the home and called authorities. 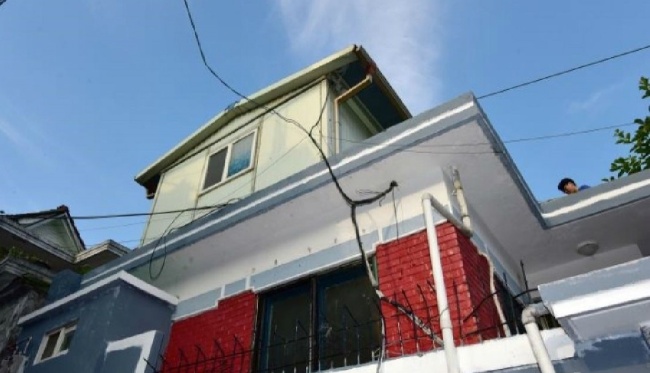 Seoul Mayor`s temporary residence, a humble roof-top dwelling without airconditioning, in one of the poorest districts in Seoul. (Yonhap)

According to the Gangbuk-gu Office and Mayor Park, the man, in his 40s, was disabled and had been living alone. He also was dependent on alcohol. He had family members living just a few minutes away, but they reportedly had not noticed anything unusual before being contacted by authorities, according to Park Gyum-soo, the mayor of the district.

Police said the man's house was filled with garbage, and there were some 10 soju bottles on the floor.

The discovery of the man’s body led to the cancellation of a press tour of Park’s current residence and neighborhood, which had been scheduled for Wednesday afternoon. A press meeting in Samyang-dong, where Park is currently residing, was still held as scheduled, where Park spoke on the death of the man.

“I’ve been informed that he had disabilities and had never been married. For whatever reason, it seems like the dead had been living a life in utter isolation, disconnected from everyone including his family,” he told reporters.

“In Japan, I hear that unattended deaths don’t only occur to those who are elderly. I feel like I’ve been assigned another task (as mayor), as such lonely deaths in our city should not be happening.”

According to a 2016 study by the Seoul Welfare Foundation, unattended deaths tend to occur in low-quality living accommodations, such as roof-top dwellings where mayor Park's currently and temporarily staying.

Among other accomodations where unattended deaths commonly take place are goshiwon (very tiny rooms reminiscent of prison cells) and jjokbang (very small rooms of a size usually 3.5 to 5 qm), that do not meet adequate housing standards under international human rights law.

The study also found that many of the victims had been not speaking to any of their family members while alive. A lot of them had been divorced and unemployed.

The issue of unattended deaths in Samyang-dong district, where the mayor is currently residing, was in fact brought up to him lastweek, when he spoke with some of the residents. 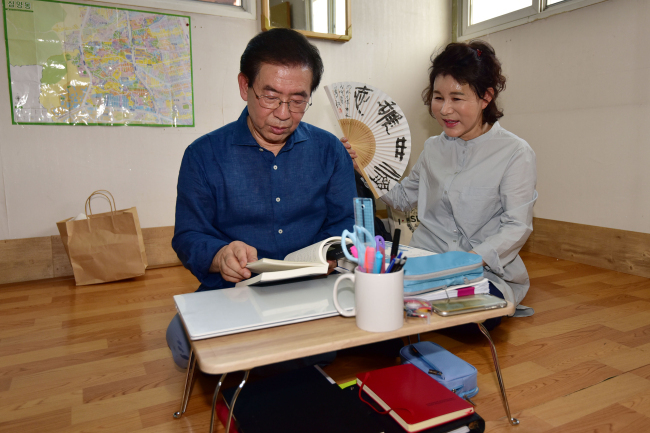 Seoul Mayor Park Won-soon (left) reads at his new, temporary residence -- a rooftop dwelling in Samyang-dong of Gangbuk-gu district of Seoul -- along with his wife, Kang Nan-hee (right). (Yonhap)
Kim Jeong-sook, a social worker for the elderly in the neighborhood, said she was traumatized after witnessing an unattended death back in April. "I found the person's body in the bathroom, and now I find it very difficult to be in any restrooms," she told mayor Park on July 30.

"I also get extremely anxious whenever my elderly clients don't take my calls. I think there should be counselling sessions for all care workers for the elderly, especially those have dealt with such deaths."

The number of reported unattended deaths in Seoul has increased significantly from 2013 to last year, from 285 to 366.

According to the Seoul Metropolitan Government, 62 percent of people in Seoul who die alone without anyone noticing are men aged 45-65, and 39 percent had underlying health conditions, including alcoholism, diabetes and depression, among others.

As of 2015, those who live alone account for 31 percent of the entire population in Seoul.