The pictures are of current and former students, who come from across Asia and sometimes farther afield to study with her, but to Saxena it is something of a family tree.

While some now work in industry, others have set up their own labs, and now have their own students.

Saxena’s family started in 2008, when she set up the Mobile Ubiquitous Systems Information Center, a lab studying wireless technology, two years after arriving in Korea and joining SKKU.

“As a professor I always wanted some grants and students to work with, that was the main motivation. And then things just came along and we got started,” she said. “It wasn’t easy at that time because of the low globalization in Korea. So the projects were in Korean and everything was in Korean, but we could sustain.”

And she says the lab has been productive, too, publishing around 40 papers in the last two years.

Rather than on hardware, the focus of her lab is on finding mathematical solutions for a better use of wireless technology -- the focus now being on next-generation 5G networks -- and coding software to make the best use of it.

Saxena is assisted by industry liaison Ahbishek Roy, a principal engineer at Samsung Electronics who provides advice from an industry perspective.

Roy also facilitates hardware testing of the MUSIC researchers’ work. Although company policy prevents the students from being onsite for testing, they get necessary access to the results. 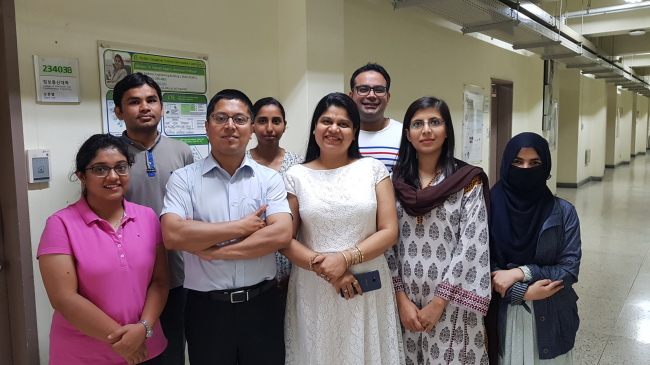 Saxena’s students mainly come from across Asia -- she mentions Pakistan’s HEC program as a good source of well-supported students -- but some have also come from Korea, as well as France and Nigeria.

The aspects and uses of 5G they are researching are equally diverse, including 3D imaging using smartphones, ways to convert small amounts of energy from wireless signals back into electrical energy and applications of game theory to provide financial incentives for users to spread network load more evenly.

There is a big emphasis in the lab on making 5G more energy efficient.

Another project relates to disaster management and was started by a Ph.D. student who had enough research to graduate and wanted to do something to help society.

“(She said) ‘I have seen, professor, a lot of people inside the rubble and they have phones, but they do not have signals. How can we help them?’ Her family had been through a small tragedy on that, maybe she was motivated or inspired by that,” said Saxena, adding she was very happy the lab allowed them to do something

“It’s a very stressful environment in Korea as such, but with that stress she also had that humanity inside that after two years she wanted to do something not for her Ph.D., but something that could help the people.”

The solution they are working on uses direct device-to-device communication without going through a central network. One device might be unable to get a signal, but able to reach another phone. That phone in turn may be able to reach the next, and so on, until eventually a device with a signal is reached.

“In a disaster we don’t need to send a big file, we just need to send something saying ‘I’m trapped here’ or ‘I’m here.’ A very small message would be enough,” said Roy.

Saxena explains that similar applications existed, but they were mainly used for video and audio.

“So this was something that we could use for fun and relaxation and luxury so let’s get down to the ground, what can we do for people who are suffering?” she said.

In the past, Saxena has also helped SKKU collaborate with universities in other countries, such as France and India. She said she was particularly proud of one project with IIT Delhi. “It might not be in terms of many papers or something like that, but in terms of academic exchange and the learning and knowledge exchange I was very happy to collaborate with them,” she said.

What’s the benefit for SKKU of having a lab like MUSIC?

“One, it provides a lot of publications, so that’s what counts really,” Saxena explains. “Second, because we have a multicultural lab, a lot of international students find it very comfortable visiting the lab. Especially new students who are enquiring and deciding whether they should join SKKU or which courses they are going to take.”

She helps students who are at the university settle in by organizing excursions and festivals for international students, supported by the university. She also runs a poster and video competition, similar to other competitions run for Korean students.

“This is something I do exclusively for the international students just to make them feel loved and that they are special to SKKU.”