According to the Health Ministry, some 3,440 Koreans have been medically treated for heat-related illnesses, including heatstroke, from May 20 to Aug. 6. Among them, 42 have died, including five who were working outdoors.

This year’s heat wave, which began in mid-July, is one of the most severe heat waves in Korean history. On Aug. 1, Korea sizzled to its highest-ever temperature of 40.7 degrees Celsius, since the country began recording weather and climate data in 1907. The same day was also the hottest day in Seoul in 111 years, with a temperature of 39.6 C. 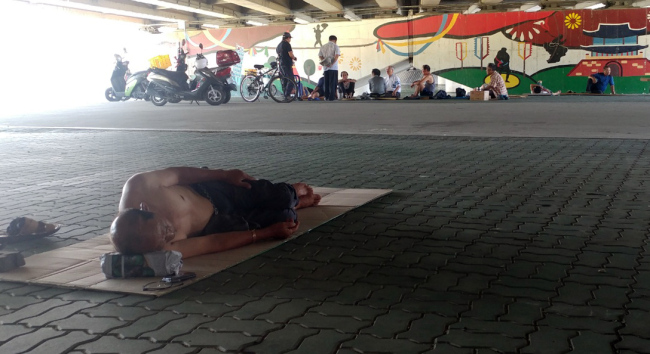 A Korean man takes a rest under a bridge in Seoul during the ongoing heat wave. (Yonhap)
Daytime highs have continued to reach 33-35 C in most provinces in the past week.

Those aged 65 or older accounted for 33.1 percent of the 3,440 Koreans who sought medical attention for heat-related health conditions.

The elderly living alone and with underlying health conditions, those who live without air conditioning, and workers who work outdoors are some of the most vulnerable to such extreme weather conditions, according to the authorities.

Last week, an 81-year-old woman, who did not have air conditioning at home, was found dead in her house in Gwangju. Police said she had been enduring the weekslong heat wave and tropical nights with a single electric fan.

Last month, at least two women in their 80s lost their lives after working at their farms in South Gyeongsang Province.

In Goesan, North Chungcheong Province, a migrant worker from Vietnam in his 50s was found dead after working outdoors. According to the Ministry of Labor, extreme heat has killed at least five outdoor workers, including a man in his 30s, this year.

Three deaths were also reported in Seoul, where at least 20 days of temperatures over 33 degrees Celsius have been recorded.

One of the three victims was an 83-year-old with dementia. The others -- aged 65 and 74 -- lived on state welfare allowance for those below the poverty line.

Last month, the presidential office said it would push to revise the relevant laws to recognize extremely hot weather as a form of natural disaster, so that victims can receive compensation.