The blast occurred around 8:48 a.m. at the plant of energy company GS E&R in the city of Pocheon, about 50 km northeast of Seoul. The 45-year-old worker, only identified by his family name Kim, died, and four other workers were whisked to nearby hospitals after suffering burns. 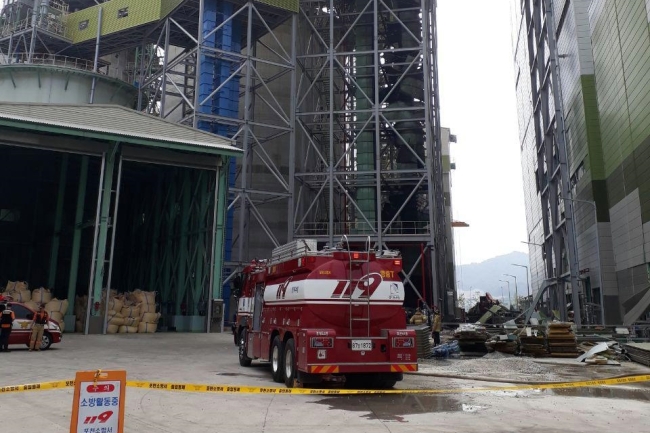 A fire truck arrives at a coal-fired power station in Pocheon, northeast of Seoul, on Aug. 8, following an explosion that killed one worker and injured four others. (Yonhap)
Police believe that combustible dust could have caused the explosion. Dust, a common source of industrial accidents, easily ignites or even spontaneously combusts when concentrated.

The exact cause of the blast is still under investigation, police said.

Ahead of its commercial operation, GS E&R implemented the test operation of the plant from April this year to July 27. The company obtained a license to build the plant in October 2015 before beginning to construct it in December the same year.

The power generation project has caused discord between the company and residents in the region, who call for the revocation of the license due to concerns about environmental contamination. (Yonhap)