[ The Korea Herald – Send E-mail ]
Chinese bike-sharing giant Ofo preparing to pull out of Korea: sources
By Sohn Ji-young
Published : Aug 7, 2018 - 16:00
Updated : Aug 9, 2018 - 10:53
Less than a year after entering South Korea, Chinese bike-sharing giant Ofo is preparing to pull out of the Korean market in a move that appears to be motivated by shifting market priorities, people familiar with the matter said Tuesday.

Ofo recently began putting most of the Korea market employees on a “suspension” as part of a general layoff, as part of steps toward an exit from the market, an industry source with knowledge of the startup’s affairs told The Korea Herald.

“Though it has yet to completely terminate its business here, Ofo Korea is in the process of letting go of most of its workers, putting them on a ‘task suspension,’ in steps toward a layoff,” the source said. 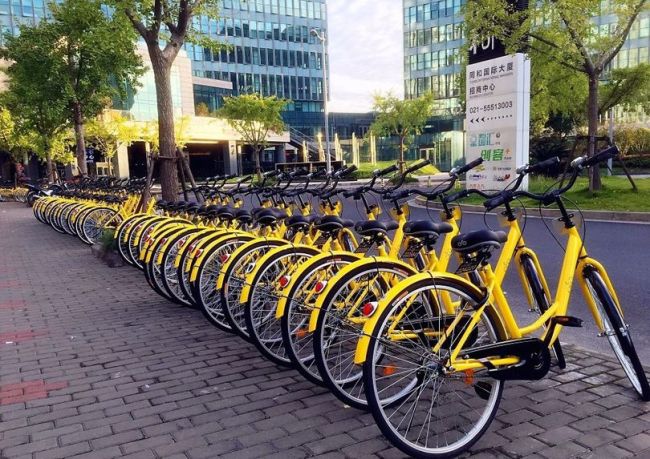 Though admitting that staffing cuts are indeed underway, Ofo said it remains committed to the Korean market.

“As part of our focus we have been working to move towards profitability and this has meant that some markets have had change in staff priorities and positions,” an Ofo spokesperson said in a statement.

“We remain fully committed to providing affordable efficient green mobility options to the Korean market,” he said, adding that Korea is one of the firm’s “priority countries” in Asia alongside Singapore, Hong Kong and Japan.

Beijing-based Ofo is the world’s first and largest “station-free” bike-sharing company, with a major presence in China. Users can ride and park Ofo bikes anywhere, without having to find a docking station. The bikes are activated and paid for -- costing about $1 for a 30-minute ride -- through a mobile app.

As of Tuesday, the Ofo app was still available for download on Korea’s Google Play store. In Busan, the bikes could be unlocked as usual via the Ofo app, according to citizen reports.

The downsizing of Ofo's operations in Korea appears to be part of a global cost-cutting strategy to retreat from countries and cities where business conditions are proving to be difficult or less profitable.

Last month, international media reported that the Chinese bike-sharing company had begun to dramatically reduce its US operations, reorienting its focus on markets with bigger profitability potential. It has also reportedly pulled out of Germany, Australia and Israel, as well as scaled back operations in the UK.

The Chinese bike-share company officially entered Korea in January this year, kicking off its services as a small-scale pilot in the country’s second-largest city Busan, under the vision that its dockless shared bike system would help relieve traffic congestion and crowded public transits.

Korea had been Ofo’s 21st market of entry, and a place in need of a new mobility service to solve the “last-mile mobility” problem -- getting people from their homes to public transit locations that are not within easy walking distance.

With aims to tackle this mobility gap, Ofo launched its app for Busan residents in January, deploying around 2,000 yellow bikes in the city. By June, the service had recorded some 15,000 usage cases.

Despite the growth, the Chinese bike-share service has been struggling with persistent complaints from users in Busan regarding bike access and management.

For instance, some users would hide or lock up the shared bikes with private locks, even when they were in a “returned state.” At other times, the bikes would not be parked in the locations pointed to by the GPS-based map. Some bikes were broken, but were still left in circulation, raising safety concerns.

On top of these issues, Ofo may have viewed Korea as a market with low growth potential considering the high barriers to expansion.

The Chinese startup had not yet expanded its services to the capital city of Seoul, where a majority of the Korean population resides. In Seoul, Ofo would have had to compete head-to-head with a government-run public bike rental system, called Ttareungyi, which is already widely used by the city’s residents.

Founded in 2014, Ofo deploys and manages fleets of bright yellow bicycles that can be easily rented through a mobile app, and left anywhere for another user. As of June, Ofo said it had some 15 million bikes in operation in more than 300 cities in 22 countries, and was serving 250 million global users.