Mogherini made the remark after Lee expressed gratitude for the EU’s continued support for Seoul‘s efforts to bring permanent peace on the Korean Peninsula and asked for the bloc to continue to play roles supportive of peace and denuclearization, the office said in a statement. 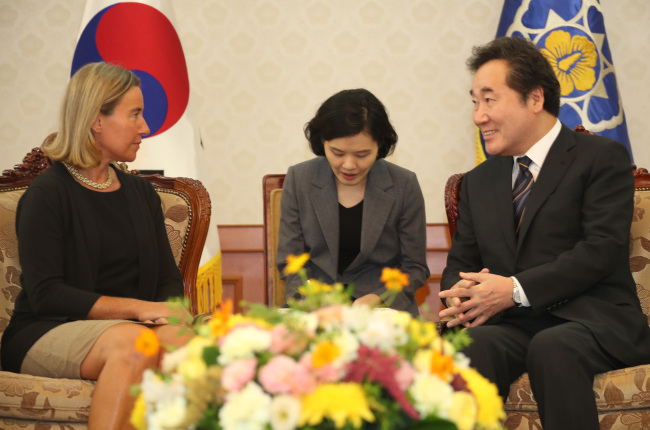 The European Union’s Foreign Affairs Chief Federica Mogherini (left) and South Korea`s Prime Minister Lee Nak-yon (right) (Yonhap)
“In light of Europe’s experiences, Representative Mogherini said the more difficult and sensitive a problem is, the more it is necessary to (try to resolve it) between directly related parties through dialogue and diplomacy with patience,” the statement said.

She also noted the usefulness of a multilateral framework in resolving such issues, the office said.

Mogherini also said the EU will support President Moon Jae-in‘s peace leadership and gladly make all possible efforts for denuclearization and lasting peace on the peninsula, according to the office. (Yonhap)