Spycam pornography, locally known as “molka,” generally refers to secretly produced, sexually exploitive videos or pictures of women in public spaces, such as restrooms and subways, among others. Such contents have also been created and shared online by victims’ ex-boyfriends, typically in retaliation with the intent to damage the women's future job and marriage prospects. 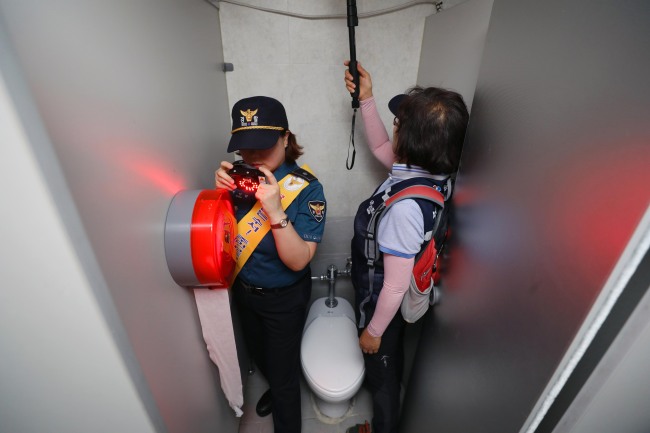 Authorities inspect a public toilet as a measure to combat spy-cam crimes in South Korea. (Yonhap)
The announcement follows on the heels of the fourth edition of ongoing women’s rights rallies against spycam pornography, which was held near the presidential office in central Seoul on Saturday. According to organizers, some 70,000 people participated in the rally this weekend -- about 10,000 more than the previous held last month -- in spite of a scorching heat wave that has gripped the country. Since its first edition in May, the demonstrations have been recorded as the biggest women’s movement in South Korean history.

The new measures were introduced as government data showed 24 percent of all spycam-related crimes so far have taken place at transportation sites -- including public restrooms in crowded metro stations, highway rest areas and airports, among others. The data also showed that the number of reported crimes involving secret cameras has been significantly increasing since the early 2010s, from 2,400 in 2012 to 6,465 last year. 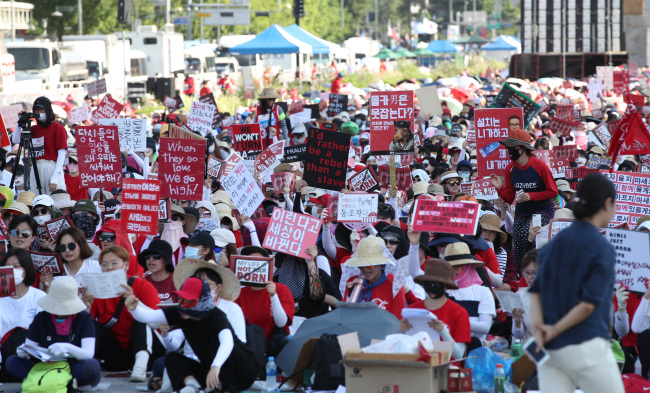 Women protesters participate in a rally in central Seoul on Saturday, calling for stricter measures to combat spy-cam pornography in the country. (Yonhap)
While almost all of the victims of such crimes in the country have been women, some of the male perpetrators who have committed such offenses include a pastor running a large church in North Chungcheong Province and a judge whose father was a lawmaker with the main opposition Korea Liberty Party.

The new government measure requires all Koreans who operate transportation sites to establish a special team to monitor the property, including public restrooms, to inspect for secretly installed cameras at least once a day. Those who do not comply will be subject to fines, they added. A public bathroom that has been monitored and regulated well and consistently for a significant amount of time will be designated a “clean zone.”

The government is also installing educational posters -- indicating “Illicit filming of others is a crime. So is watching the footage online” -- in some 1,000 institutions for women’s and children’s rights, as well as 254 police stations nationwide. 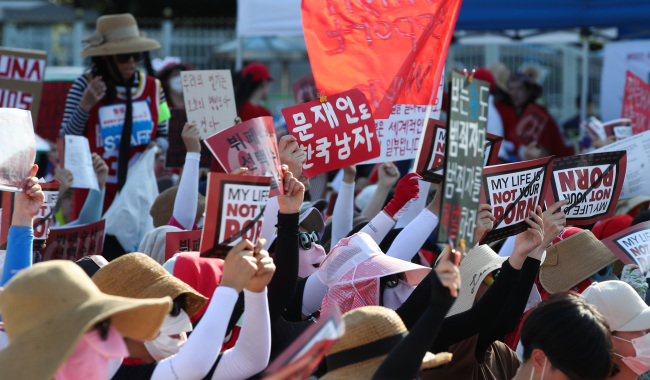 The study by the Korea Press Foundation, which surveyed some 1,000 Korean men and women aged 20-59, found that 72.5 percent of those who did not support the rally think the protest may in fact make more Koreans think negatively of feminism.

At the same time, 17.1 percent said Korean women do not experience gender-based violence and discrimination to an extent that they need to hold a mass rally.

The particular mass rally has been a subject of debate as some participants have made controversial remarks against men during its previous editions. They were later accused by the rally’s critics of openly committing hate speech. Among other public figures, Gender Minister Chung Hyun-back has been criticized for publicly endorsing the mass rally in spite of existing controversies in the past.