[ The Korea Herald – Send E-mail ]
Seoul tells N. Korea to speed up denuclearization, US to faithfully keep promises
By Yonhap
Published : Aug 6, 2018 - 15:07
Updated : Aug 6, 2018 - 15:07
South Korea called on North Korea on Monday to further accelerate its denuclearization process while asking the United States to faithfully implement its promises of rewarding the communist nation.

“We are asking North Korea to speed up its denuclearization process. And to the US, we are asking that it show sincere efforts about corresponding measures that North Korea is demanding,” Cheong Wa Dae spokesman Kim Eui-kyeom told reporters when asked what his government thought about a possible impasse in denuclearization talks between Washington and Pyongyang. 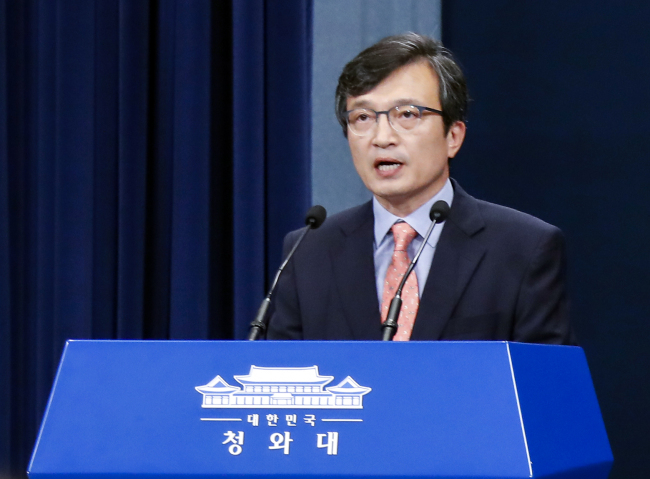 Cheong Wa Dae spokesman Kim Eui-kyeom (Yonhap)
US Secretary of State Mike Pompeo earlier claimed to have had “productive” talks on ridding the North of its nuclear ambitions during his two-day trip to Pyongyang last month.

North Korea, however, reacted angrily, accusing the US of making “gangster-like” demands for its unconditional denuclearization.

“If North Korea comes up with a more detailed plan for its denuclearization while South Korea and the US swiftly take corresponding measures, the speed (of denuclearization) will further increase,” the South Korean president said in a special lecture given during his three-day state visit to Singapore from July 11-13.

Moon had also said the countries may face repercussions from the international community should they fail to keep denuclearization pledges made by their leaders.

Moon’s remarks have prompted strong reactions from the North, which claimed the South Korean leader was only seeking to aid his country’s largest ally, the US, in pressuring the North to abandon its nuclear weapons.

The Cheong Wa Dae spokesman’s remarks apparently sought to clarify that Moon and his country are also urging the US to honor its end of the deal.

The North’s agreement to completely denuclearize first came at an inter-Korean summit between Moon and North Korean leader Kim Jong-un on April 27. Kim reaffirmed his commitment in his second meeting with Moon on May 26 and again in a summit with US President Donald Trump, held in Singapore on June 12.

When asked when Moon and Kim planned to meet again, the Cheong Wa Dae spokesman said there have not yet been any serious discussions on what would be a fifth inter-Korean summit in history.