[ The Korea Herald – Send E-mail ]
How much do we know of late artist? MMCA holds retrospective exhibition of Bahc Yi-so
By Shim Woo-hyun
Published : Jul 30, 2018 - 15:37
Updated : Jul 30, 2018 - 15:37
The late artist Bahc Yi-so’s career was short-lived. He died of a heart attack in 2004 at age 47, two decades after launching his career in New York in 1984. The National Museum of Modern and Contemporary Art’s Gwacheon branch is holding a retrospective exhibition that highlights works of Bahc, as well as an archive of materials he left behind.

“Bahc Yi-so: Memos and Memories,” the artist’s first-ever posthumous solo exhibition at the MMCA Gwacheon branch, makes extensive use of archive materials to help viewers better understand the artist and his works. The archival materials include those donated by Bahc’s family in 2014. 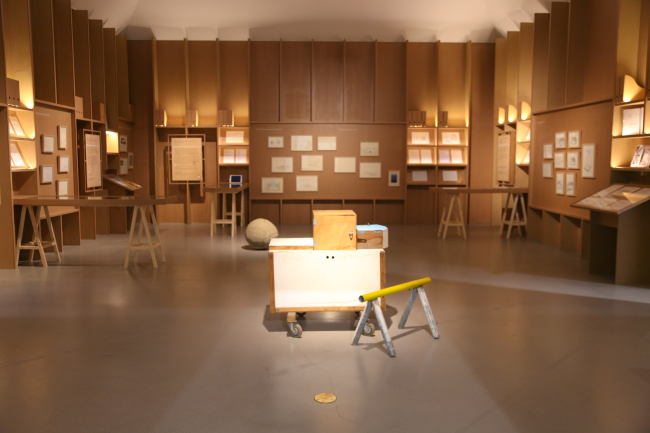 A room contains late artist Bahc Yi-so’s drawings (MMCA)
“The sub-title ‘Memos and Memories’ was created in reference to a quote from French historian Patrick Lagrange, ‘History is that certainty produced at the point where the imperfections of memory meet the inadequacies of documentation,’” curator Lim Dae-geun said during a press conference at the museum on July 24.

The Bahc family donated some 180 pieces of drawings, 21 volumes of personal notebooks, along with lecture materials and exhibition records, which will be made available to the public on request, the museum officials said.

The 21 volumes of notes include detailed drafts and process records of Bahc’s works produced from his graduation from Pratt Institute in 1984 until just before his death in 2004. 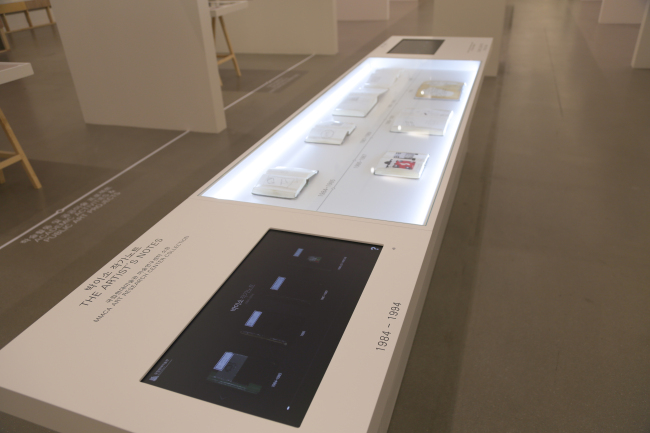 A glassed showcase contains some of the 21 volumes of notes written by the artist. (MMCA)
Next to the actual notebooks kept in glass showcases are digital kiosks that display scanned images of the notebooks, making all the details from the notes available to viewers.

The pages are full of descriptions and directions on how works are to be produced and displayed to the public. They are like elaborate food recipes. His works may seem sloppy on the surface, but his notes testify that all of them were meticulously formulated and thought out.

Bahc’s well-known “Your Bright Future” -- a set of 10 floodlights connected to one another by a shabby wooden structure and untidy electrical wiring -- looks loosely structured, but it must have gone through many stages that viewers might not be able to imagine.

A desk the artist used while making “Your Bright Future” is another case in point. Displayed next to the artwork are the desk and two drawings on the wall next to it. The two desk designs are different and only one of them has been actually produced. Bahc no doubt had a difficult time choosing one over the other -- the one with a column over the one with legs wearing socks.

Just how meticulous and thoughtful the artist was is shown in the way he organized 200 jazz mixtapes he made.

Bahc was perhaps a perfectionist. He was also an eccentric figure. He painted three stars with Coke, soy sauce and coffee, and named the piece “Three Star Show.” He did a performance that involved pulling a heavy, large-sized rice pot across the Brooklyn Bridge.

“Among the few things Bahc brought back when returning to Korea in 1995 were a wooden cabinet and a some 350-kilogram concrete boat he made,” curator Lim said. The concrete boat that the artist later tore down has been re-made for the exhibition, based on instructions in the artist’s notes.

We may never know the reasons for Bahc’s meticulousness and eccentricity -- perhaps alternative labels for being complicated -- in approaching art. However, what is certain is that he was devoted to art making.

“Every time I paint, I hope the painting to be liked by other people. But at the same time, I feel discouraged, when thinking about what the paintings hung still on the wall can actually do nowadays,” Bahc wrote on a 1986 painting he made based on a painting by Joseon-era artist Gyeomjae Jeong Seon. 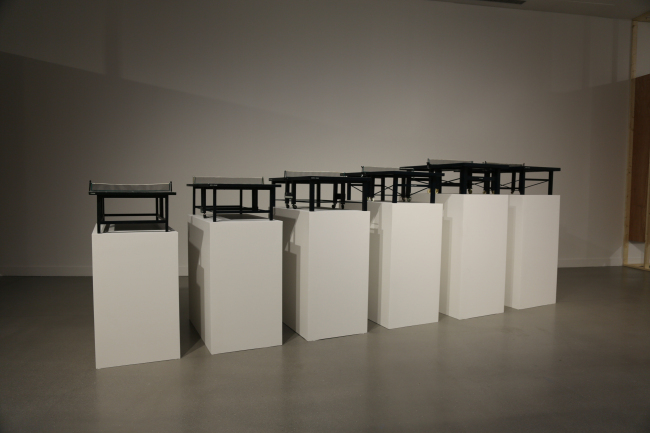 An installation view of Bahc Yi-so’s “Pride Series” at the MMCA. (MMCA)
Devoted to art making, Bahc was also one of the first artists here to ask why we do art, instead of asking what and how to present, according to the curator.

“Bahc’s approach to art exhibitions was different from others. For instance, he did not choose artists based on their profiles when holding an exhibition.” curator Lim said, referring to Minor Injury, a now-defunct alternative gallery space in the Greenpoint area of Brooklyn, New York, which Bahc founded to give exhibition opportunities to nonmainstream artists.

The exhibition runs through Dec. 16.