[ The Korea Herald – Send E-mail ]
[Newsmaker] In South Korea, women’s group protests Facebook’s rejection of feminist ad
By Claire Lee
Published : Jul 29, 2018 - 18:10
Updated : Jul 29, 2018 - 18:10
A South Korean women’s rights group is protesting Facebook’s decision to reject its ad, which criticizes the country’s lookism and social pressures for women to look appealing. An illustration that includes nudity was the grounds for Facebook’s rejection of the ad, according to the group, which says the ad did not have a sexual connotation.

The online ad was intended for a feminist event for high school girls scheduled to take place in Incheon on Aug. 11. The event aims to educate young women on gender-based oppression, especially body shaming, as well as the pressure on women to a certain way to please others.

Participants will also be educated on the “corset-free” movement, a local campaign that resists gendered lookism by, for example, encouraging women to deliberately not wear makeup. Many Korean employers, especially those in the service and retail sectors, require female employees to be meticulously groomed at work. 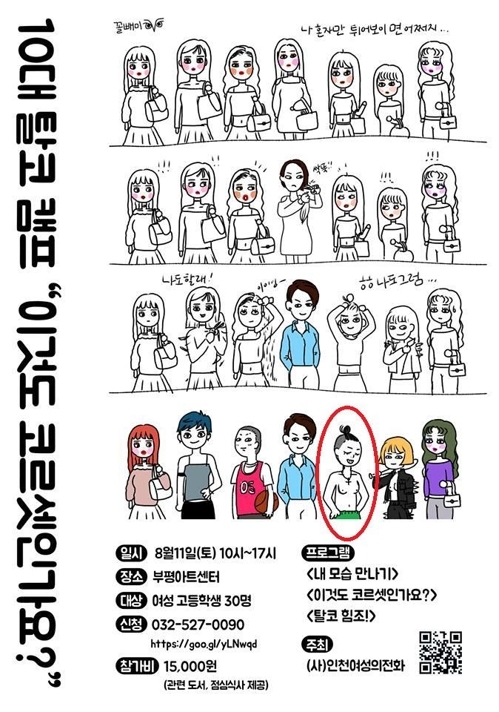 A South Korean feminist ad that has been disapproved by Facebook for its inclusion of nudity (circled in red). (Incheon Woman Line/ Yonhap).
According to event organizer Incheon Woman Line, the group tried to advertise the event on Facebook using its paid service, but was rejected by Facebook authorities because the illustration contained nudity.

The ad depicts seven hand-drawn young women gradually transforming from looking the same --  with well-groomed long hair, skirts and polished makeup -- to each developing her own style, including short hair dyed blue and a baggy baseball uniform. One of the post-transformation women is depicted half-naked, revealing her breasts.

According to Facebook’s advertising policies, ads on Facebook must not contain adult content, which includes “nudity, depictions of people in explicit or suggestive positions, or activities that are overly suggestive or sexually provocative.”

“We regret Facebook’s decision to simply consider our ad as a form of ‘adult content,’ without making any effort to understand the context,” the organization said in a statement.

“We wonder if this is Facebook’s way of opposing a feminist movement that resists gendered lookism. We ask Facebook to reconsider its decision, by re-reviewing our ad as content that promotes and fights for gender equality.”

This is not Facebook’s first conflict with a Korean feminist group. Earlier this year, Facebook deleted a post by another Korean women’s group that contained a photograph of a woman revealing her breasts to protest sexism.

Facebook restored the photo following the group’s protest rally in front of the company’s Seoul office.

In regard to the ad by Incheon Woman Line, however, Facebook has said unlike the restored photo which was personal content, no ads on Facebook can contain nudity, regardless of whether it contains sexual connotation or not.

Not all Korean women endorse the corset-free movement. Some have openly opposed the campaign, saying the movement itself is another form of oppression against women.

“I like to put makeup on for my own pleasure,” wrote one woman on Twitter. “No one should be forced to wear makeup if she doesn’t want to. But forcing a woman not to wear makeup, even if she enjoys it, is another form of repression. We should be able to do whatever we want.”