The newly unveiled documents were found in computers and USB devices that belonged to Im Jong-heon, former vice director of the National Court Administration. They show that the NCA had contacted Kim Ki-choon, then-chief of staff for former President Park Geun-hye, in its effort to dispatch more judges to overseas government offices.

Yang is suspected of having deliberately delayed the Supreme Court’s ruling on a compensation suit filed by Korean employees who were forced into labor during Japan’s colonial rule, against Nippon Steel & Sumitomo Metal Corp, in return for overseas posts for judges, including the Korean Embassy in Austria. 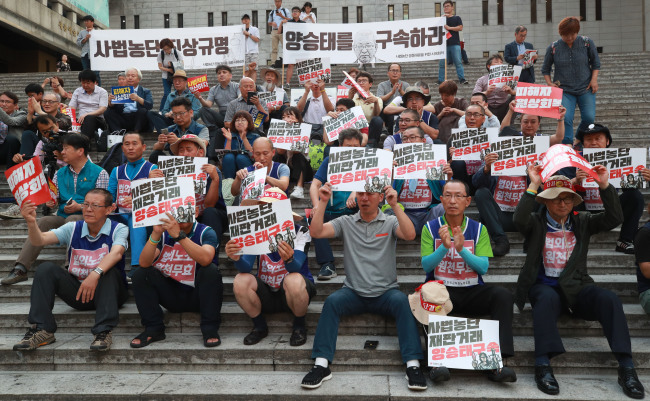 Protesters call for former Supreme Court Chief Yang Sung-tae`s indictment in central Seoul earlier this year. (Yonhap)
The Foreign Ministry at the time allegedly contacted Yang in 2016, saying South Korea-Japan relations may “irreversibly deteriorate” should the court rule in favor of the Korean ex-laborers. While waiting for the verdict, seven out of the nine Korean ex-laborers died due to old age.

Meanwhile, a special inquiry panel under the Supreme Court said that it would release to the media, as early as Monday, 228 of the 410 documents it had found in May. Not all names that appear in the documents will be disclosed, it said. The special team in May announced the discovery of some 410 documents that showed that the National Court Administration under Yang had illicitly and clandestinely made deals with the presidential office during the Park administration to “prevent unpredictable rulings” on cases that were “politically sensitive.”

Also on Sunday, a nongovernmental organization disclosed that from 2015 to 2018, high-ranking judges under Yang’s leadership received some 960 million won ($861,000) worth of “special activity” funds -- a special allowance given for research or other work-related purposes.

Yang received some 223 million won worth of such funds during his term as the Supreme Court chief, from January 2015 to September 2017. The amount accounts for 23.1 percent of all “special activity” funds given to high-ranking members of the Supreme Court from 2015-2018.

The NGO, People’s Solidarity for Participatory Democracy, which obtained the information through an open records request to the government, also said Yang was given a large amount of such funds from July to December in 2015, receiving “allowance” that ranged from 7.5 million won to 12.8 million won a month.

Yang had a private meeting with then-President Park Geun-hye in August that year. The NGO suggested that an illicit relationship between Yang and the presidential office might have led to the large amount of allowance -- funded by taxpayers’ money -- that was given to Yang in 2015, as well as other members of the Supreme Court. The funds might have been spent on nonwork-related purposes, such as political donations and even personal expenses, the NGO added.