“Nothing has been confirmed as the cause of the dam collapse. We believe the rescue operation and assisting flood recovery must be prioritized at this stage,” a SK E&C official told The Korea Herald. “Finding the exact cause of the accident will be conducted separately.”

The comments came after Laos’ Minister of Energy and Mines Khammany Inthirath said that poor construction might have contributed to the accident, in a radio interview with Radio Free Asia. 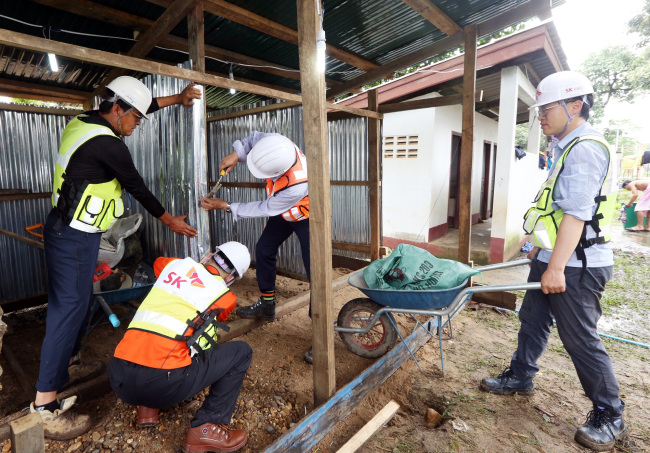 SK E&C employees build temporary shelters for flood victims in the southern province of Attapeu, Laos where a dam collapsed last week. (SK E&C)
The dam collapse in Laos claimed at least 27 lives and an unconfirmed number of people are missing.

Questions have been raised about the quality of the construction of the $1.2 billion dam, undertaken by a joint venture between South Korean builder SK E&C, Laotian and Thai firms.

Despite restoration work, heavy rain has been hampering access to the road near the dam, making it difficult for workers to approach for restoration, according to local media outlets.

The hydroelectric dam in Laos that collapsed Wednesday was built by the joint venture involving SK E&C, the building arm under SK Group. Construction of the dam began in November 2013 and was to be completed by February 2019.

SK Group said it also began building temporary shelters for some 7,000 flood victims who were forced to flee their homes, along with restoration work for villagers, officials said Sunday afternoon.