Titled “Jet Lagged,” the latest exhibition at Arario Gallery’s Ryse Hotel branch is an exhibition that presents works of young artists striving to find their way in their cultural, historical and personal surroundings. 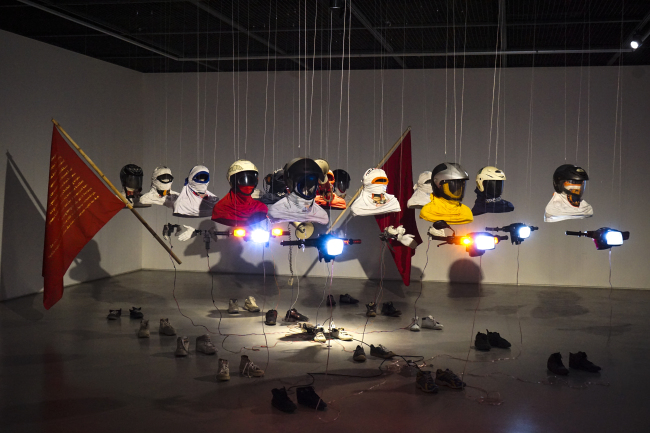 “Power Unit,” an installation from 2015, is the artist’s attempt to capture the crowd.

Hanging from the ceiling are empty busts decorated with motorcycle helmets and balaclavas fashioned from T-shirts. Also accompanying the busts are motorcycle headlamps, as well as clapping hands and megaphones that make dissonant sounds. Beneath the busts are worn-out shoes arranged in the same direction.

Suharto’s resignation in 1998 was followed by many political movements that called for changes, the artist explained. However, the exuberant movements fell short of improving people’s lives as they failed to become cohesive, the artist said of the political climate.

Next to the Kuswidananto’s works are oil paintings by Xiangmin that focus on capturing the appearance and behavior of young people facing rapid political and economic changes in contemporary China. Tattooed boxers in rough strokes symbolize the emotional and psychological state of the young generation in ever-changing China.

Baek presents paintings that have sculpture-like characteristics. The “Smile Figure” series uses circular canvases with personas hung above rectangular canvases, expanding the boundaries of the conventional four-sided canvas into a humanlike canvas collage.

Baek said, “I wanted to make variations on the frames that I had long felt missing.” 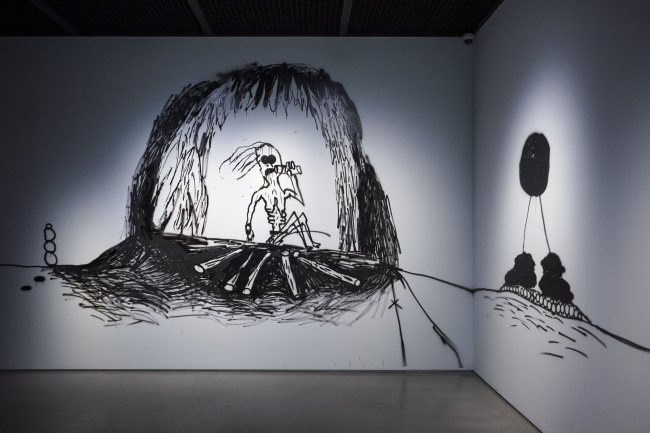 “I somehow became interested in and fascinated by the notion of death. The ‘Cannibal Kingdom’ is a series of works started as I was delving into serial murders,” Sim said.