The health ministry is pushing to enlarge the size of graphic warning images on cigarette packs, officials said Sunday, a move aimed at discouraging people from smoking.

The Ministry of Health and Welfare said it plans to announce the measure in September or October to send a stronger message to smokers by expanding the size of the warning images from the current 50 percent of the package's exterior to 70 percent.

Currently, the size of the warning photos must cover more than 30 percent of both sides of cigarette packages with warning text making up an additional 20 percent. 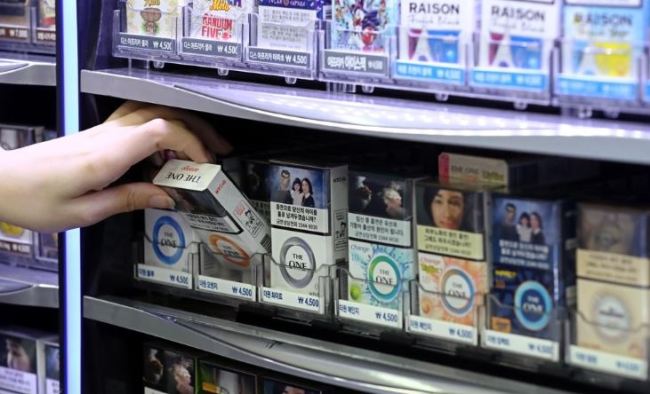 (Yonhap)
In 2016, South Korea began requiring tobacco companies to put pictorial warnings on the upper part of both sides of cigarette packs, with the graphic images being changed every 24 months as part of efforts to maintain awareness of the side effects of smoking.

Currently, 105 countries have adopted such pictorial warnings, with 43 of them mandating over 65 percent of tobacco packages to be covered with disturbing pictures that depict the serious consequences of smoking.

The ministry said it also plans to expand no-smoking zones across the country.

Data from the Organization for Economic Cooperation and Development put the smoking rate of South Korean men aged 15 and older at 31 percent in 2015, the highest among 15 OECD countries surveyed. Japan came in second with 30 percent, followed by Italy with 25 percent. (Yonhap)