[ The Korea Herald – Send E-mail ]
Once blacklisted artist highlights controversial issues in solo exhibition
By Shim Woo-hyun
Published : Jul 24, 2018 - 18:08
Updated : Jul 24, 2018 - 18:08
Artist Hong Sung-dam was on the Park Geun-hye administration’s blacklist of artists, which included a total of 9,473 names that were to be excluded from receiving state funds or support.

His controversial painting “Sewol Owol” is now being shown for the first time in Seoul at Insa Art Center, as part of his solo exhibition “Sewol Owol and Candlelight,” which opened Thursday. 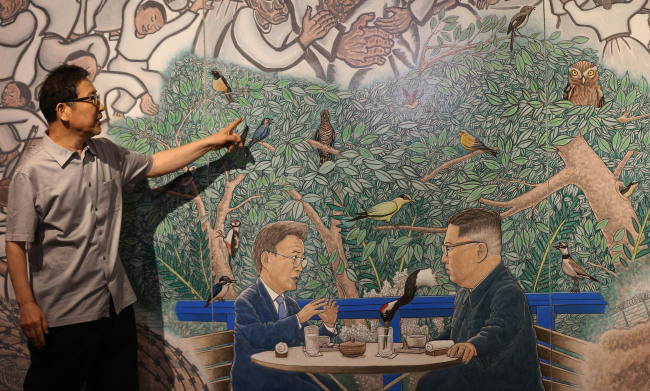 Artist Hong Sung-dam explains a painting based on the first summit between President Moon Jae-in and North Korean leader Kim Jong-un. (Yonhap)
The Park administration’s political suppression of Hong was explicit. When the artist tried to introduce his large-sized satirical painting “Sewol Owol” -- which depicted the now-ousted President Park as a scarecrow controlled by her father, the late President Park Chung-hee -- at the Gwangju Biennale in 2014, he was censored and eventually banned from the nation’s most famous art biennale.

During a press conference held Thursday, Hong stood once again in front of the painting.

“This painting became famous because of Park Geun-hye. However, the most important part of the painting is not where she is depicted. It is the other side,” Hong said. 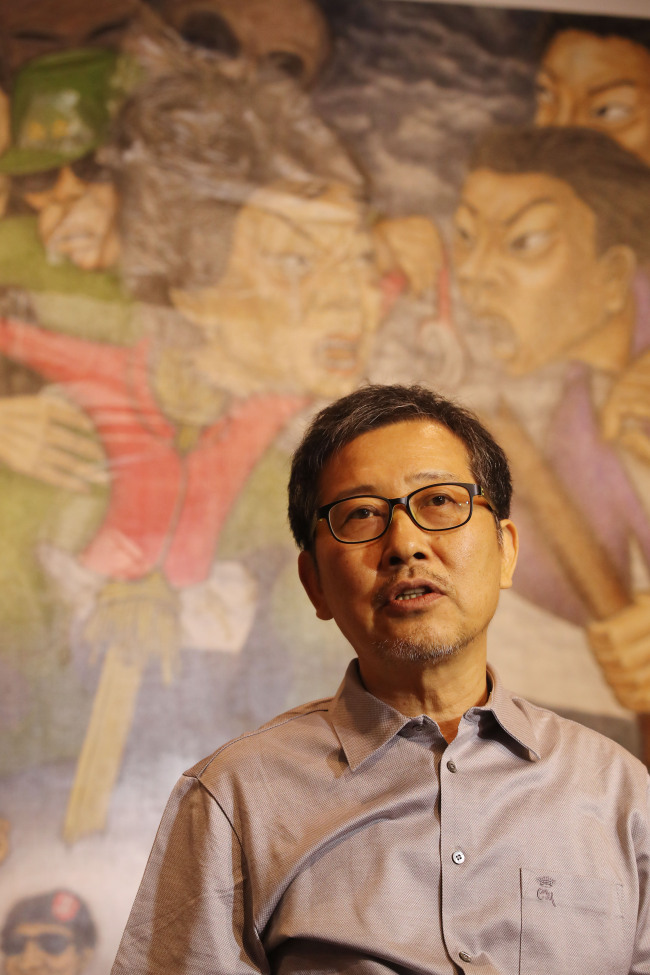 Artist Hong Sung-dam speaks in front of “Sewol Owol” during a press conference at Insa Art Center on Thursday. (Yonhap)
Pointing to the right upper corner of the painting, Hong said that the most important part of the painting is where it depicts the militarism that fed Japan’s empire in the past and the victims of Japan’s wartime military sexual slavery.

To have true democracy take root in Korea, the nation should come to terms with the complicated historical and political issues that linger in East Asia, Hong said.

An issue that the Moon Jae-in administration has to address is the atrocities that Korean soldiers inflicted upon Vietnamese civilians during the Vietnam War, Hong said.

“If a proper apology is not made on the massacres Korean soldiers committed in Vietnam, Korea is not justified in demanding an apology from Japan over its pillaging,” Hong continued. “I am planning on visiting Vietnam and making artworks base on the Vietnam War.”

The rationale behind Hong’s argument is the need to eradicate remnants of old militarism for the sake of peace in East Asia. 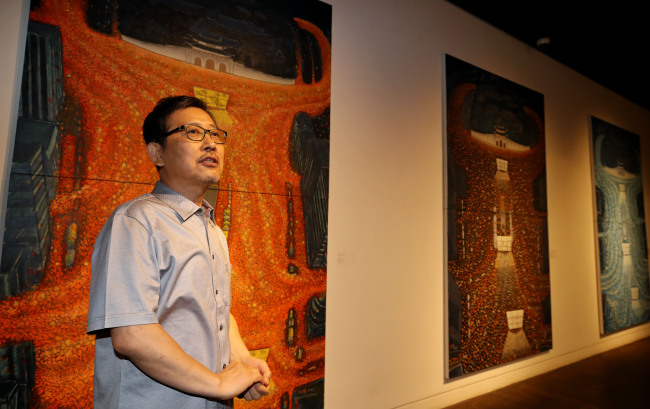 Artist Hong Sung-dam talks about his paintings based on the candlelight protests that led to the impeachment of President Park Geun-hye. (Yonhap)
The exhibition at Insa Art Center comprises some 60 paintings revolving around controversial issues, ranging from the Sewol ferry disaster in 2014 and the candlelight demonstrations that led to the impeachment of Park to the issue of slavery during Japanese colonial rule in Korea. Hong’s first work on the Vietnam issue, featured in the exhibition catalogue, is not on display at the gallery.

“Some paintings, including the piece on the Vietnam War, have not been included in the exhibition as the subject matter is too strong and they could possibly overshadow other works. I will be looking for an alternative exhibition space to hold another exhibition comprising works that deal with politically sensitive subjects,” Hong said, adding that he had pulled the paintings out of the exhibition and Insa Art Center did not impose any restriction.

Also on display at the ongoing exhibition is a painting depicting the first summit between Moon and North Korean leader Kim Jong-un on April 27.