Cheong Wa Dae on Tuesday said it believes North Korea’s reported decision to dismantle a key nuclear test site will have a “good effect” on denuclearization, seeing it as a step forward amid the perceived lack of progress in US-North Korea talks.

Pyongyang began dismantling key facilities at its Sohae satellite launching station, including a rocket engine test stand and a rail-mounted processing building, where space launch vehicles were assembled before being transferred to the launch pad, according to a report by 38 North, a US-based North Korea-monitoring website. The site added that the move represents a “significant confidence building measure on the part of North Korea,” as the facilities are believed to have played a significant role in development of Pyongyang’s intercontinental ballistic missile program. 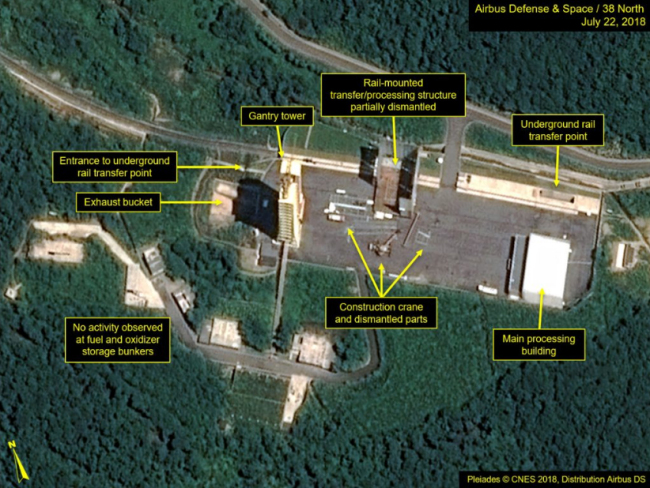 This July 22, 2018, satellite image released and annotated by 38 North on Monday, July 23, shows what the US research group says is the partial dismantling of the rail-mounted transfer structure, at center, at the Sohae launch site in North Korea. 38 North said North Korea has started dismantling key facilities at its main satellite launch site in what appears to be a step toward fulfilling a commitment made by leader Kim Jong Un at his summit with President Donald Trump in June. (Yonhap-38 North)
“It will likely have a good effect on denuclearization,” Nam Gwan-pyo, a senior director from the presidential National Security Office, told reporters, referring to the recent report.

“It is a better sign than nothing, and I believe (the North) is moving step by step toward denuclearization,” the Seoul official added.

A Cheong Wa Dae official who requested anonymity said that the presidential office had been aware of the recent developments surrounding the dismantlement, as it received relevant reports at a meeting in the morning.

Experts echoed Cheong Wa Dae’s view and interpreted the spotted movement as a crucial part of joint efforts among South Korea, the US and North Korea in declaring a formal end to the 1950-53 Korean War, which ended with an armistice agreement.

“Washington is currently divided on declaring an official end to the Korean War on concerns surrounding the US troops on the Korean Peninsula and that they may lose the military option card they currently hold over North Korea,” said Hong Min, an analyst at the Korea Institute for National Unification.

“The dismantlement of the Sohae satellite launching station will alleviate such friction within the US and facilitate cooperation among the two Koreas and the US in the progress. The US is probably discussing with the North on when to officially announce and showcase the dismantlement -- like it did with Punggye-ri test site in April -- to make further progress toward their common goals,” he added.

Hong also pointed out that the dismantlement, which reportedly began in the past two weeks, is in line with US Secretary of State Mike Pompeo’s third official visit to Pyongyang earlier this month. More talks are being exchanged between Washington and Pyongyang than meets the eye, he said.

But critics downplayed the report, saying that shutting down the facility does not fully deprive North Korea of its capability to build and launch ICBMs.

“It is a positive step toward denuclearization, but North Korea still has transporter erector launchers, which are mobile missile launchers, and it knows dismantling the station would work as a good showcase for the world,” said Cha Du-hyeogn, a visiting research fellow at the Asan Institute for Policy Studies.

“It’s too early to confirm anything because North Korea is just implementing what was discussed previously. It has yet to announce and show the official dismantlement, and it’s difficult to say the move would be a crucial part of the denuclearization process.”

Like repatriation of remains of US soldiers killed during the Korean War, it is part of building bilateral trust between the two countries that are technically engaged in war, Cha said.

The news came nearly 40 days after the landmark summit between US President Donald Trump and North Korean leader Kim Jong-un. Trump said in Singapore that Kim had committed to destroying a “major” missile engine test site, without revealing details.

Sohae, situated on the northwest coast of North Korea, is a facility designed for launching satellites into orbit. The North successfully tested a long-range rocket, carrying a satellite, at the site in 2016, and critics claimed that testing a ballistic missile was the actual purpose of the test. The act was soon condemned by the UN Security Council.

Sohae has been the North’s primary rocket launch site since 2012.