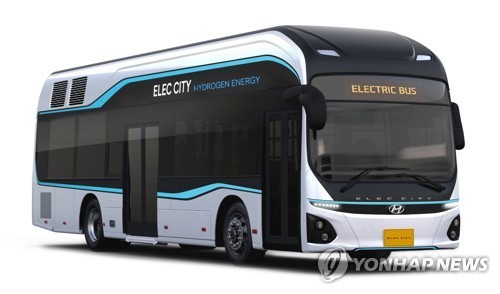 At a meeting convened Tuesday by the minister of trade, industry and energy, Paik Un-gyu, the government said it would ease regulations on production and transportation of hydrogen-powered buses. The meeting was attended by Korea Gas Corp. President Cheong Seung-il, Hyundai Motor Vice President Park Kwang-sik and the heads of four related companies.

To boost the production of the green vehicles, the ministry said it would allow the installation of a reformer -- a system that switches compressed natural gas into hydrogen -- in limited development districts.

To make transportation of hydrogen more economical, the ministry said it would increase the standard of capacity of hydrogen carriers.

The latest measure is in line with the government’s plan to provide 15,000 hydrogen-powered cars by 2022. Last month, the government announced it would invest 2.6 trillion won ($2.9 billion) to foster the ecosystem of the nation’s hydrogen cars.

The government also aims to lower the price of hydrogen-powered cars by around 30 percent from the current 70 million won to 50 million won by localizing car parts.