The Seoul Central District Court will deliver the judgment on Park, 66, in the sentencing hearing slated for 2 p.m. Prosecutors demanded 15 years in jail. 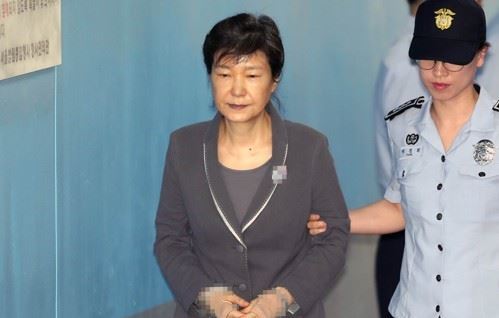 (Yonhap)
Friday's sentence will add to her 24-year punishment she is already serving on a string of corruption charges in a massive influence-peddling scandal involving her once closest friend, Choi Soon-sil.

In early January, prosecutors indicted Park on additional charges that include bribery, embezzlement and loss of state funds for illegally accepting 3.5 billion won ($3.2 million) from the National Intelligence Service between May 2013 and September 2016.

Park is accused of spending some of the money for private use, such as bills for secret phones she used to contact Choi, maintenance costs for her private residence in southern Seoul and medical treatment. The funds were also used for incentives and bonuses for Park's close aides.

Her three former aides who were indicted alongside her for their involvement in the NIS bribery case were found guilty only of fund misappropriation in a separate trial last week. The court ruled the NIS provisions to Park's office were not bribes.

Friday's trial will also be televised live, following the live broadcast of her sentencing trial on the corruption case on April 6. (Yonhap)