Local media on Thursday said that North Korean leader Kim Jong-un summoned his ambassadors and heads of overseas missions back to Pyongyang, amid a shift in the atmosphere surrounding Kim’s diplomacy.

Earlier in the day, the South’s media outlets reported that the heads of the North’s embassies and other missions were called in for what is “presumed to be an ambassadorial meeting,” citing unnamed sources. 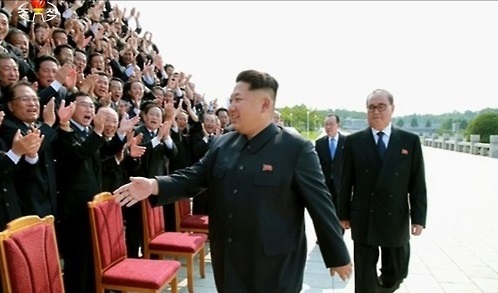 North Korean leader Kim Jong-un prepares to take a photo with officials, when he recalled the heads of the North`s embassies and other missions back to Pyongyang in 2015. (Yonhap)
South Korea’s Ministry of Unification said it has yet to confirm the matter, but added it is also closely observing relevant developments. It said it believes it is an annual event despite the lack of reports released by North Korea after the 43rd ambassadorial meeting held on July 15, 2015.

If confirmed, this year’s meeting is expected to serve as a platform for Kim to unveil his plans surrounding North Korea’s “new diplomacy,” as Pyongyang is working toward breaking out of its diplomatic isolation.

North Korea is now in the process of negotiating with the US on dismantling its nuclear program.

“Kim Jong-un is likely to stress the meaning of North Korea’s changing foreign policy strategy in line with the significance of the 70th anniversary of the regime on Sept. 9,” said Shin Beom-chul, a senior fellow at the Asan Institute for Policy Studies.

“He will deliver core information regarding his plan on nuclear negotiations with the US and ask the ambassadors to implement their roles in the plan while they’re stationed in different countries.”

Kim signaled a shift in his foreign policy earlier this year through a series of meetings with global leaders. He made his diplomatic debut through a summit with Chinese President Xi Jinping in March, followed by an inter-Korean summit in April and a meeting with US President Donald Trump in June.

With Kim abandoning his Byungjin policy -- the simultaneous pursuit of economic development and nuclear weapons capability -- and vowing to focus on fostering the North’s impoverished economy since March, he seems to be seeking the lifting of international sanctions imposed on Pyongyang through diplomacy, according to experts.

The roster of North Korean ambassadors attending this year’s meeting is yet unknown.

In 2017, North Korean ambassadors to the United Nations, China and Russia were among those Kim summoned to a meeting in Pyongyang, Yonhap News Agency reported at the time. It came as tensions on the Korean Peninsula had escalated to one of the highest levels, following the North Korea’s ballistic missile tests.

Kim has also used the ambassadorial meeting to consolidate his domestic power. It is believed that the aim of the 2015 meeting was to maintain his influence over the diplomats, as signs of those questioning Kim’s cruel and ruthless policies had been spotted. Kim Pyong-il, Kim Jong-un’s uncle and incumbent North Korean ambassador to the Czech Republic, was also summoned.

As Kim Pyong-il is former North Korean leader Kim Jong-il’s half brother, critics say Kim Jong-un has been weakening his uncle’s influence as another member of the “Baekdu blood line” within the regime, to avoid a power struggle.