The only campaign to begin at half past noon on the day, the launch of Eve Cup crashed the Tumblbug site due to excessive traffic. Once back online, Eve Cup reached its target of 10 million won ($8,900) within 25 minutes and twice the target amount within six hours.

As of noon, Tuesday, more than 880 people had offered their money for the project and the crowdfunding project is racing toward three times the initial goal. Eve Cup’s campaign is up on Tumblbug for another 35 days. 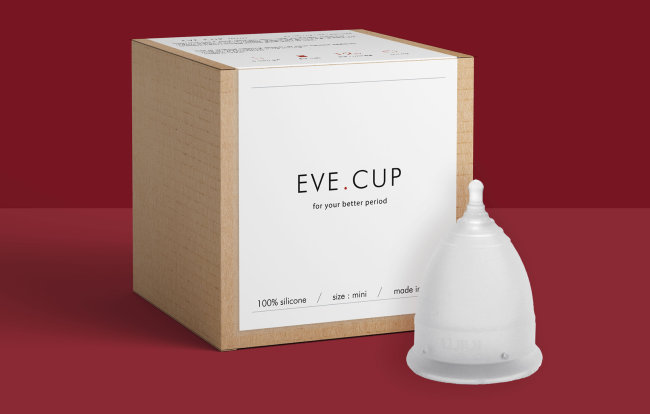 Gina Park, co-founder of Eve, said there was no fixed limit to the amount of orders the company would take, but would prioritize meeting commitments over the number of orders.

The instant enthusiasm for the menstrual cup launch reflects the burgeoning interest in alternative sanitary solutions for women in Korea.

Female-friendly and environmentally conscious startups have sought to both introduce US-made cups to Korea and develop local products.

The Eve Cup is made by social venture firm Instinctus, better known as Eve, whose objective is to provide safe, organic substitutes for products that have to come in touch with human reproductive organs.

Eve Cup is registered with US’ Food and Drug Administration and is acknowledged by the People for the Ethical Treatment of Animals as “cruelty-free and vegan” for forgoing animal tests.

Eve’s more representative products are vegan condoms and biocompatible lubricants. The company first attracted attention in March, 2017, after setting up condom vending machines for teenagers to promote the practice of safe sex.

Other options for menstrual cups in Korea currently include Femmycyle, With Cup and more.

Femmycyle, produced by US’ FemCap, was the first menstrual cup to gain regulatory approval in Korea. It is domestically distributed by local social venture Ease&More.

With Cup, by Entiown, is the first Made-In-Korea menstrual cup that can now be purchased both online and offline in Korea via Entiown’s website and at health and beauty retailer Lalavla shops.

Other US products such as the Diva Cup and Lena Cup are also used by Korean women who make direct online purchases from overseas. Korean products like Luna Cup have also won US FDA approval, but are still undergoing the process of acquiring local authorization.