[ The Korea Herald – Send E-mail ]
Super-Mom Serena into 10th Wimbledon final
By Reuters
Published : Jul 13, 2018 - 14:52
Updated : Jul 13, 2018 - 14:53
LONDON -- Serena Williams demonstrated that having a baby had not robbed her of any of her phenomenal tennis skills when she became the first mother in 38 years to reach the Wimbledon final, with a 6-2 6-4 demolition of Germany’s Julia Goerges on Thursday.

Goerges had come into her first Grand Slam semi-final having belted more winners (199), more aces (44) and more unreturned serves (113) than anyone else in the women’s draw but those statistics counted for little when she came up against an opponent who is in hot pursuit of a record-equaling 24th major.

Remarkably, the 36-year-old was back in a Grand Slam final just 10 months after giving birth to her daughter Alexis Olympia.

“It’s crazy. I don’t even know how to feel because I literally didn’t think I’d do this well in my fourth tournament back in 16 months,” said the American, who won the 2017 Australian Open while in the early stages of her pregnancy. 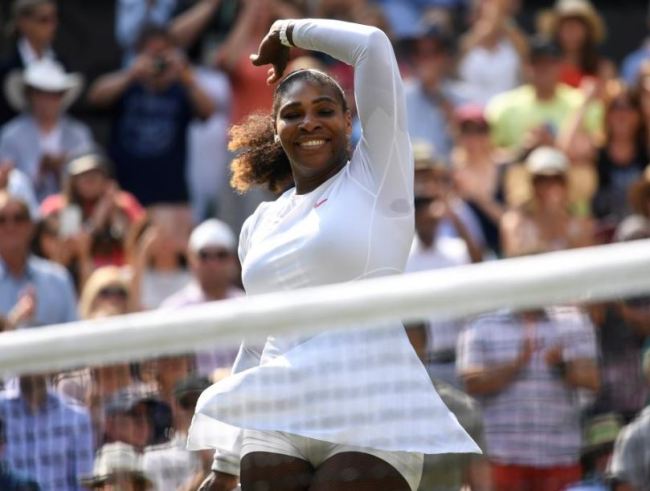 Serena Williams of the US celebrates winning her semi final match against Germany's Julia Goerges. (Reuters)
“When I don’t have anything to lose, I can just play so free and that’s what I’m doing.

“This is not inevitable for me, I had a really tough delivery and multiple surgeries and almost didn’t make it to be honest. I couldn’t even walk to my mailbox, so it’s definitely not normal for me to be in a Wimbledon final.

That enjoyment was clear to see as she dashed Goerges’s hopes of setting up an all-German final with Angelique Kerber in 70 unforgiving minutes.

The 13th seed had never taken a set off Williams in three previous meetings and unfortunately for her, the American was once again at her dominant best on Thursday as she bludgeoned down five aces and 16 winners to finish off Goerges. 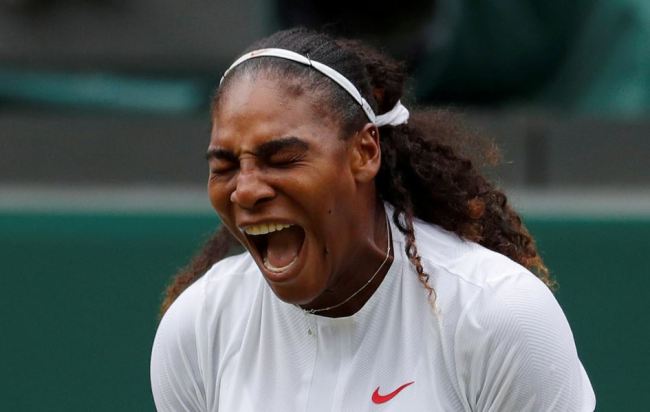 Serena Williams of the US reacts during her second round match against Bulgaria's Viktoriya Tomova. (Reuters)
In both sets Goerges was broken in the sixth game, surrendering each with an error on break point.

She did fight back to break Williams when the American, seeded 25th despite her laughable ranking of 181st, was serving for the match at 5-3 up in the second.

However, Goerges simply did not have the firepower or belief to stop the seven-times champion, who had hoisted the Venus Rosewater Dish on her two previous appearances in 2015 and 2016, from surging to a 20th successive Wimbledon win.

A jubilant Williams was back giving the crowd a one-arm raised victory twirl after reaching a 10th Wimbledon final when her opponent swiped a lob behind the baseline.

Williams is the lowest ranked player to reach the women’s final but that number will fool no one, and especially not Kerber who was runner-up to the American in the 2016 final.

For 29-year-old Goerges, Thursday’s outing was not completely a lost cause because despite the mauling, she had finally made it to a semi-final at one of the four majors - albeit on her 42nd attempt.

“Serena is the one who you want to play, who you want to get the experience from,” said the German, whose previous five visits to the All England Club had ended in first-round defeats.

“She knew how to win that match by her experience, and ... I had no experience.

“Right now I’m sitting here at a semi-final of Wimbledon where a lot of people are dreaming of. That’s something to be positive about today.” (Reuters)