The union held a total six-hour partial strike Thursday, and will stage a 12-hour strike Friday after failing to reach an agreement in wage talks. This is the seventh consecutive year that union members of the automaker have staged strikes.

According to the Data Analysis, Retrieval and Transfer System, the temporary halt in production will cost the company 41.6 trillion won ($37 billion). 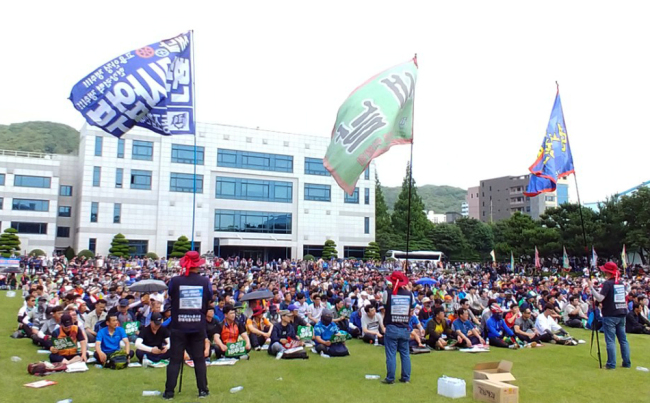 Hyundai Motor's unionized labor holds partial strike at the Ulsan Plant on Thursday after failing to reach an agreement in wage talks. (Yonhap)
Some 65 percent of Hyundai’s unionized labor agreed to the strike earlier this month.

Hyundai’s union is pushing for an 116,276 won raise in base wage and a 30 percent bonus of net profit along with an unconditional guarantee for the retirement age of 60, along with shortened work hours.

In last month’s negotiations, the company suggested a 35,000 won higher base wage, and a 200 percent plus 1 million won bonus.

The union and the company will separately hold the 17th round of wage talks on Friday afternoon with aims to reach a compromise before summer vacation starts at the end of this month.

The union is slated to hold a meeting to discuss whether to stage further strikes next week.