[ The Korea Herald – Send E-mail ]
Paintings bring back memories of countless past encounters
By Shim Woo-hyun
Published : Jul 5, 2018 - 17:53
Updated : Jul 5, 2018 - 17:55
With dark-and-bright contrasts throughout, young local painter Jwa Hae-sun’s portraits of ordinary people remind us of our own memories of numerous overlooked encounters. Her portraits of unknown people have the power to evoke questions on the otherness of the others and the solitude that we feel among a crowd of unknowns.

Jwa’s solo exhibition “The Most Ordinary Stories,” which opened Thursday at Arario Gallery Samcheong branch, comprises of works that capture everyday scenes and people that anyone might have encountered. The possibility of the portrayed individuals being someone we may have met inspires memories of daily life. 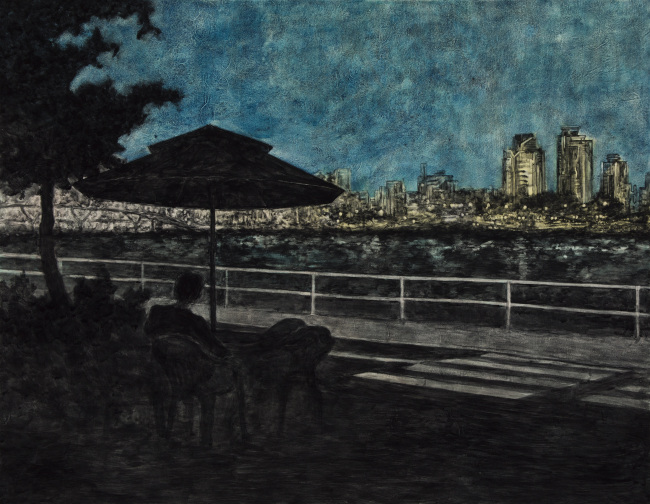 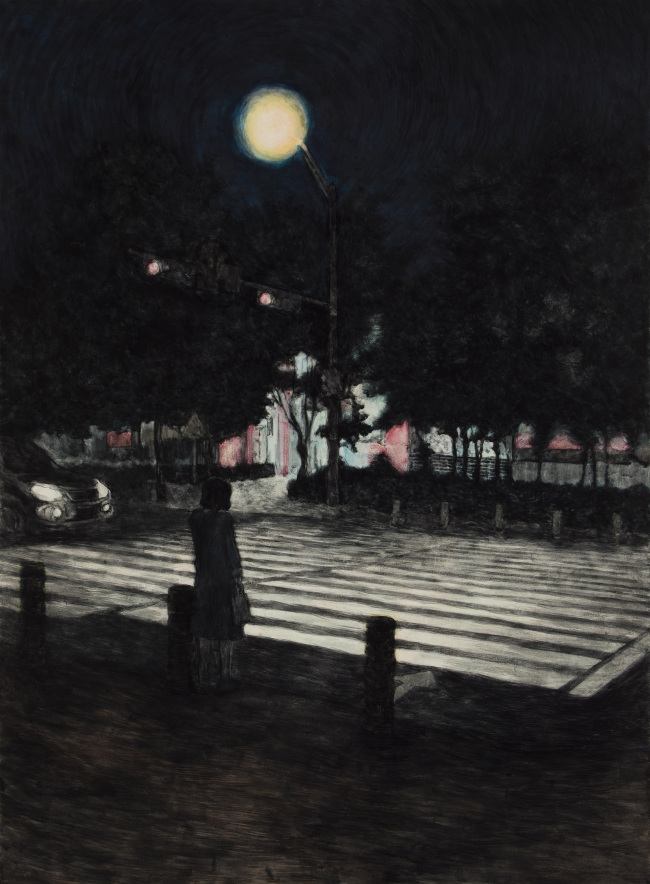 “Going Home 2” by Jwa Hae-sun (Arario Gallery)
“With color paintings, I wanted to focus on a single person in each piece. I intentionally did not paint details of individual faces because it would set limits,” Jwa said during a press conference held on Wednesday at the Samcheong branch in Seoul.

Jwa‘s seven pigment-colored paintings portray unidentifiable individuals, who are all looking elsewhere. Mostly their backs or sides are depicted, they arouse the curiosity of the viewers.

They may seem ordinary on the surface, but it has also been suggested that the everyone in Jwa‘s paintings have one‘s own story or a cross to bear.

This is quite explicitly shown in her 15 hand-written short stories, which accompany a series of charcoal drawings.

“I first wrote the short stories and asked others to hand-write each piece to make them appear as if they were written by individual people,” said Jwa. “I taught children art at their homes for four to five years. These writings are based on the stories I collected during that period,” Jwa added.

The stories come as rather striking since they deal with quite unusual events or personal eccentricities such as a story of a woman with kleptomania stealing her friend’s watch and flushing it down the toilet.

The stories are odd, but they still tell the very peculiar details that constitute what we call ordinary life. By adding the microscopic details of daily life, Jwa makes her representation of the ordinary life to be more faithful and plausible. The absurdities and peculiarities of her stories make the people in her paintings appear more realistic and more relatable to the audience. 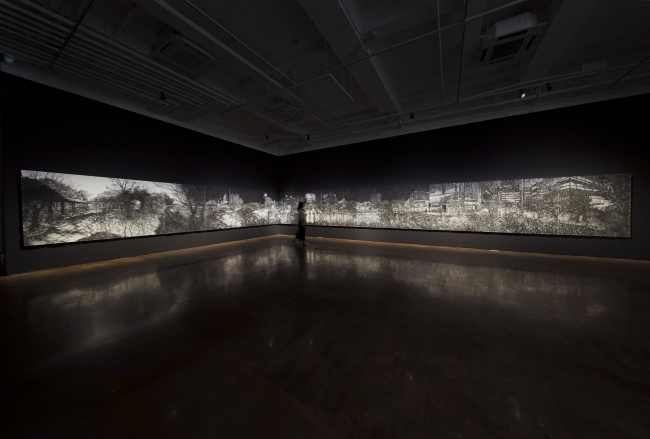 An installation view of “The Most Ordinary Stories” series (Arario Gallery)
Presented with the stories are 15 connected charcoal paintings that the artist has worked on over the last two years. Moving from the writings again to her paintings of ordinary scenes that span across two sides of the walls, the visitors are brought back to the serene outdoor landscapes of cities and parks.

Walk along the scenes in black-and-white contrast, the viewers are again invited to ask themselves who and what kind of people they are, on yet another level. Though the portrayed individuals are alone in the 15 pieces, they are now connected. They are all part of a larger whole.

The exhibition runs through Aug. 19.