“Our role as the nation’s intellectual property office is to connect such forte with the ‘fourth industrial revolution’ and create an industrial environment in which knowledge assets may spearhead the innovative growth of the economy.” 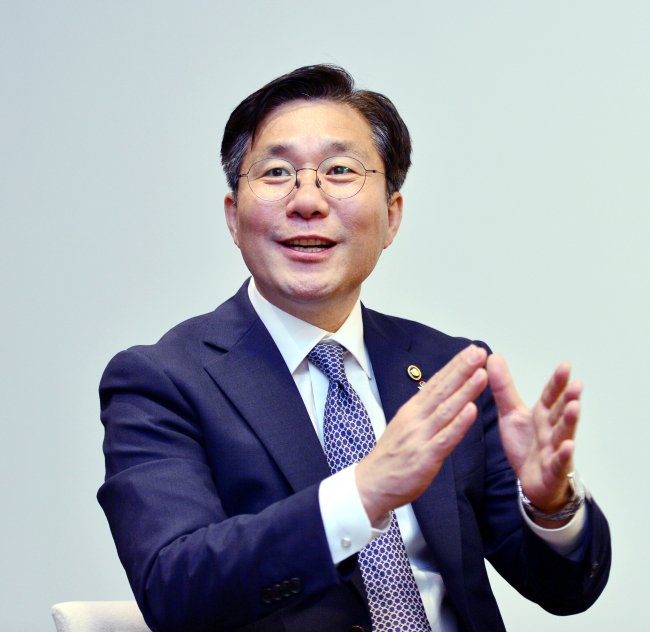 A priority task for KIPO down the road, according to Sung, is to activate the intellectual property transaction market by encouraging the participation of private players.

“Research and assessment services on patents, trademarks and design rights have so far been led by the public sector, but in order to foster the market, the next step should be to expand the role of the private sector,” he said.

Anticipating some 12,000 new jobs and a consequent economic effect amounting to 600 billion won ($538 million) in the knowledge property service sector over the next five years, KIPO is planning to expand the public’s access to the government patent big data system and to increase autonomy for research enterprises.

Despite its repeated vows for job creation and income-led growth initiative, the Moon Jae-in administration has been struggling to promote the nation’s employment indexes amid a slow growth trend and ailing manufacturing industries.

But the IP service jobs -- such as administrative assistance in patent application, legal representation in disputes, distribution, research and consulting -- are relatively unrestrained from conventional assets and economic trends, and therefore subject to a wider range of potential growth, he explained. 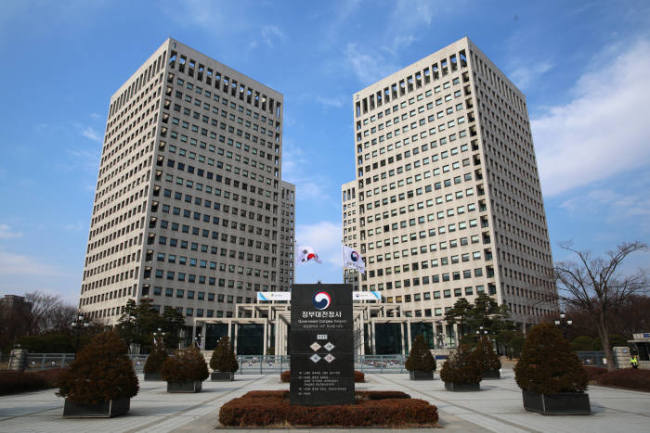 “The accelerating pace of technological advancement has made it all the more crucial to protect patents as a way of encouraging and inspiring innovation,” he said.

Because of the relatively low amount of damage compensation, however, there are still rampant practices of technology extortion or abuse here, he added.

The median value for patent infringement damages in South Korea is currently tallied at 60 million won which, considering the gap in gross domestic product, is about one sixth of the corresponding figure in the United States.

“In order to restore a fair market order, (the government) should adopt a number of restrictive measures to deter conglomerates from stealing technology from smaller players,” Sung said.

The set of plans include the upcoming introduction of a punitive damage compensation system, which applies additional indemnification in cases of intentional patent infringements or trade secret breaches.

While the IP office is working on revising the trial process for patent infringement suits to alleviate the burden of proof for SMEs, a special redemption system is to take effect starting next year to offer financial support to cash-strapped companies.

One of the key actions is the latest revision of the Unfair Competition Prevention and Trade Secret Protection Act, according to the KIPO chief.

The new law, slated to come into effect on July 18, includes additional clauses on protecting the exclusive value of ideas obtained from business proposals, business consultations, bidding and exhibitions.

“Once related petitions are filed, KIPO shall directly lead the investigation and make corrective recommendations, which will spare the victims of litigation costs or evidence collection burden,” Sung explained.

The KIPO leader recently participated in the so-called IP5 meeting, held in the United States in June, with the world’s IP-leading states -- the US, Japan, China, and the European Union.

The cooperation was kicked off in 2007 to facilitate the business cooperation among the top five patent offices which handle some 80 percent of the world’s patent applications and related procedures.

Seoul is also set to host next year‘s IP5 convention in June in Songdo International City in Incheon, marking its third case of hosting the annual event, according to officials.

“I dare say that in the field of intellectual property, (South Korea’s) status is almost equal that of permanent member states in the United Nations Security Council,” the KIPO chief claimed. 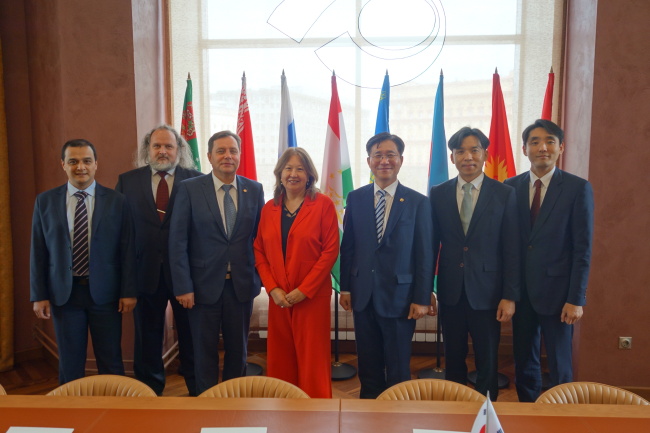 Sung Yun-mo (fifth from left), commissioner of the Korean Intellectual Property Office, poses for a photo with officials from the Eurasian Patent Office, including its President Saule Tlevlessova (fourth from left), following talks on intellectual property partnerships in the areas of patent prosecution highway and data exchange on June 21 in Moscow, Russia. (KIPO)

Also, in line with the Moon administration’s economic road map, the Korean IP office has been expanding ties with counterparts in Southeast Asian states and Russia over recent months.

Sung, who took office in 2017 as KIPO‘s 25th commissioner, previously worked in the Office for Government Policy Coordination, the Ministry of Trade, Industry and Energy, and the Small and Medium Business Administration which is the former body of the current Ministry of SMEs and Startups.

By Bae Hyun-jung and Lee Kwon-hyoung