KAZAN, Russia -- South Korea did the nearly unthinkable at the FIFA World Cup here on Wednesday, blanking defending champions Germany 2-0 to close out Group F action behind yet another stellar performance from goalkeeper Jo Hyeon-woo.

Though South Korea were still eliminated from knockout contention, Jo was named the well-deserved Man of the Match. But he remained the picture of humility, saying any of the two other goalkeepers on the team, Kim Seung-gyu and Kim Jin-hyeon, would have done just as well.

"I am sure they would have done a good job in net if they got the nod," Jo said. "Everyone, from the players down to the coaching staff, competed as one for the people back home." 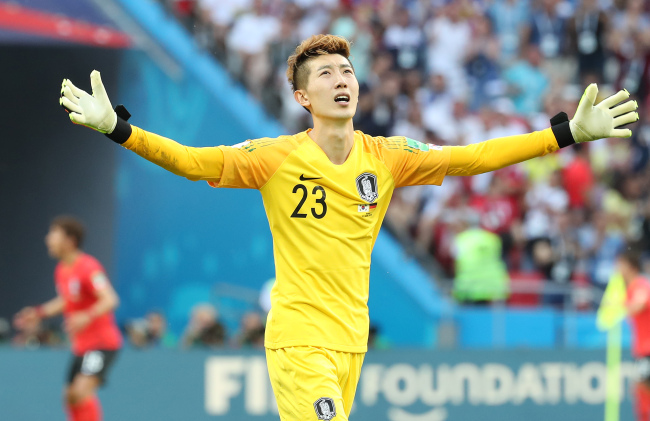 South Korean goalkeeper Jo Hyeon-woo (Yonhap)
Prior to the World Cup, Jo was the least experienced of the three custodians on the national team with five caps. Kim Seung-gyu had played at the 2014 World Cup and had 32 caps, followed by Kim Jin-hyeon, who starred in South Korea's run to the 2015 Asian Cup final, with 14.

But head coach Shin Tae-yong made a surprise starter out of Jo in the first Group F match in Russia against Sweden on June 18. South Korea lost that match 1-0, and that's only because Jo made some outstanding saves to keep it a one-goal game.

Jo was back in goal against Mexico last Saturday. South Korea went down 2-1, with the first Mexican goal coming on a penalty and the second one on a breakaway followed by a defensive lapse. Jo could hardly be blamed for either of the goals.

And the 26-year-old had his moment to shine against Germany, which had 26 shot attempts and put six on target without scoring. 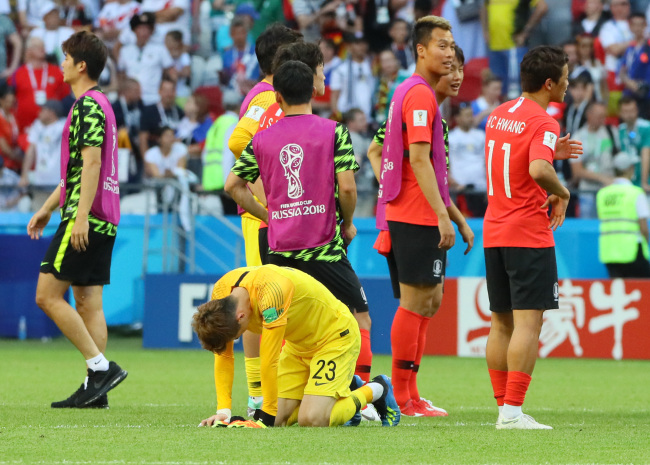 (Yonhap)
Jo's biggest save came in the 47th minute, just as the match started opening up following a lackluster, scoreless first half. Joshua Kimmich sent a cross to an unmarked Leon Goretzka for a header from point-blank range, and Jo soared to his right at the last minute and punched the ball out of play.

Germany didn't look particularly sharp in the final third, and the few shots that they got off were turned aside by Jo. In the 68th minute, Mario Gomez tried to head one home, but Jo was there to stop it standing tall in the middle of the net.

South Korean defender Kim Young-gwon broke the deadlock three minutes into stoppage time -- a goal that was initially wiped out on an offside call but counted later by the video assistant referees -- and Son Heung-min added one a few minutes later.

To advance to the round of 16, South Korea needed to beat Germany by at least two goals and have Mexico beat Sweden in the other Group F match. South Korea handled their end of the bargain, but Sweden defeated Mexico 3-0 as those two countries moved on.

With the matches being held simultaneously, Jo said he wasn't aware of the other score during his match.

"I only found out about the Mexico-Sweden result after our game," he said. "Knowing that we'd just played our last match, I got some tears in my eyes later. We all played hard for our fans back home and tried to make sure we'd have no regrets at the end." (Yonhap)