A pro-North Korean newspaper in Japan said Wednesday that China will be able to keep away from international sanctions on the North following the recent launch of dialogue between Pyongyang and Washington.

The Chosun Sinbo said in an article that the US-led international sanctions on North Korea will face changes, as the North has risen to the status of a strategic nation through the completion of its nuclear weapons program and created an atmosphere for dialogue with the US.

"Until last year, the US had attempted to incite conflict between North Korea and China by bringing Beijing into the anti-North sanctions networks," said the article titled "Construction of a New, Fair and Just World." 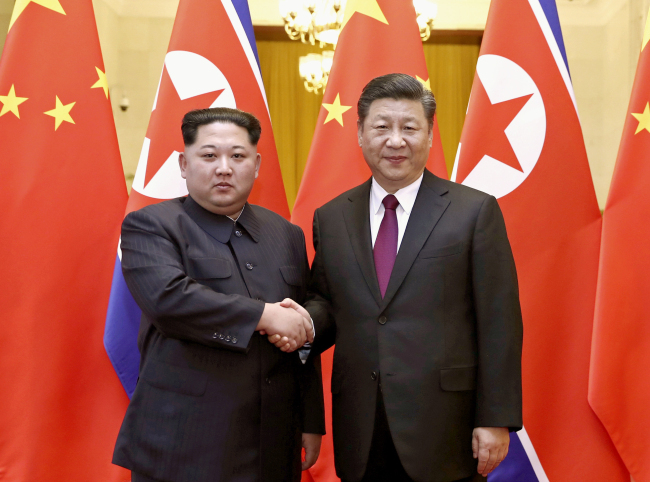 North Korea`s leader Kim Jong-un (left) and Chinese President Xi Jinping (Yonhap)
"China is now able to keep its distance from the US-led sanctions, because the DPRK has accomplished its nuclear weapons capabilities and risen to the status of strategic nation," said the article.

DPRK is the abbreviation for the Democratic People's Republic of Korea, North Korea's formal name.

It then noted that regional powers at odds with the US are now pursuing closer relationships with North Korea due to its status rise, referring to the recent enthusiasm of China and Russia for talks with Pyongyang.

"The DPRK's diplomatic achievements supported by neighboring superpowers will also encourage struggles in all nations and peoples."

The newspaper concluded that North Korea will make simultaneous efforts to establish new post-summit relations with the US and stick to its external policy of safeguarding and advancing socialism in accordance with its status as a strategic nation. (Yonhap)