South Korea will take on defending champions Germany in their final group stage match at Kazan Arena in Kazan, some 800 kilometers east of Moscow, on Wednesday.

South Korea sit in last place in Group F with two losses, but they're still in contention for the round of 16. If they beat Germany, and Sweden lose to Mexico, then the three teams other than Mexico will end up with one win and two losses, meaning tiebreakers will decide the runners-up. 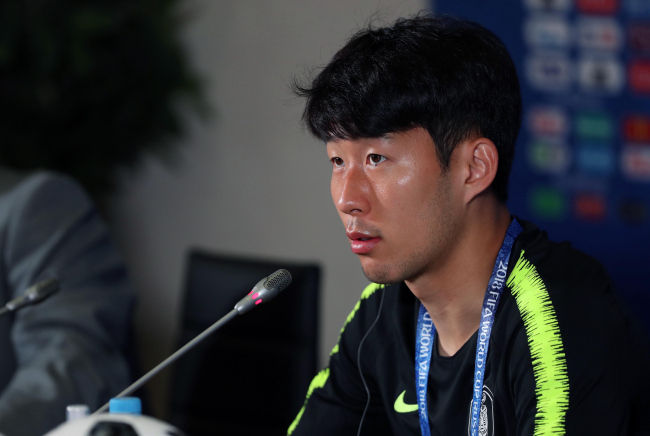 South Korea national football team forward Son Heung-min speaks at a press conference at Kazan Arena in Kazan, Russia, on June 26, 2018, one day ahead of the Group F match between South Korea and Germany. (Yonhap)
Son is familiar with Germany, having made his pro debut with Hamburg in 2010 after spending two years with the German Bundesliga club's youth team. In 2013, he moved to Bayer Leverkusen and played there for two seasons before signing with Tottenham Hotspur in the English Premier League.

"I spent my teenage years and professional career in Germany," Son said at a press conference at Kazan Arena. "I feel honored to face Germany in a big competition like the World Cup, but what's important is the result."

South Korea are clearly underdogs in the match, but Son, who scored 41 goals in 135 Bundesliga matches, said that his team will try to do as much as they can.

"What's important is to make Germany feel that they're playing a difficult game," he said. "I hope our players don't think too much on the pitch and just play simple, direct football."

South Korea will miss captain Ki Sung-yueng, who is out with a left calf injury. Before Ki's exit, the Taeguk Warriors had lost left back Park Joo-ho, formerly with Borussia Dortmund, to a hamstring injury.

Despite the absence of two veterans, Son said the team atmosphere is not bad and the players are determined to fill their void.

"Ki and Park are important players to this team, but it's a pity that they can't play," he said. "But I believe other players will do well and they'll prepare hard."

The upcoming match may well be South Korea's final one at this World Cup. Son, who is in his second World Cup, emphasized that his team's World Cup campaign is not over and that he'll also think about teammates who have yet to make an appearance in football's showpiece event.

"There are players who are supporting their teammates from the bench, and they have been all working hard for the team to come this far," he said. "It's true Germany are better than we are when it comes to individual talent, but the ball is round and football is a sport with 11 players. We can make it happen."

Son said while he knows that chances are slim for South Korea to reach the knockout stage, it's important to play hard through the end.

"If we can put in our best effort in the next match, I think that's something important," he said. "I think we can play a game that gives hope to our fans." (Yonhap)