Batting leadoff and playing left field, the South Korean outfielder kept his impressive run alive with a double in the second inning against the Minnesota Twins at Target Field in Minneapolis, Minnesota, on Saturday (local time).

He batted 1-for-4 with a walk for the day, as the Rangers beat the Twins 9-6 for their seventh straight victory. 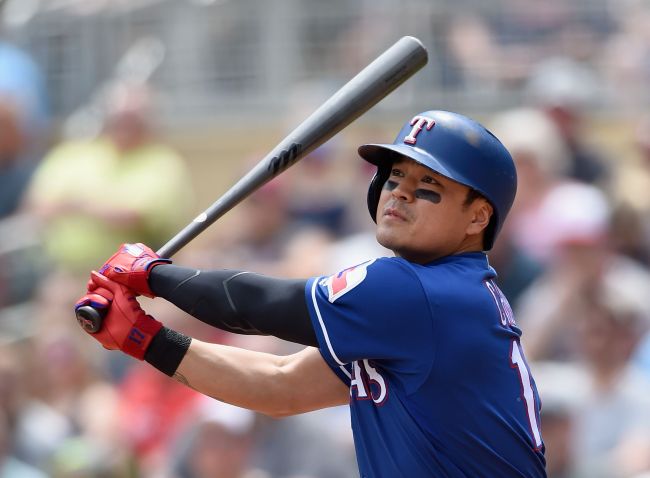 Choo Shin-soo of the Texas Rangers watches his ground rule double against the Minnesota Twins in the top of the second inning of a major league regular season game at Target Field in Minneapolis, Minnesota, on June 23. (Yonhap)
After striking out in his first at-bat against starter Jake Odorizzi, Choo went the opposite field for a ground rule double in the second inning, driving in Robinson Chirinos. Choo later scored on Nomar Mazara's single, as the Rangers put up six runs on the board to erase a 2-0 deficit.

With the Rangers up 8-2 in the third, Choo drew a two-out walk. He grounded out to first base in the fifth and lined out to left field in the eighth. Choo was lifted for Carlos Tocci in left field to start the bottom of the ninth.

Choo owns the longest active on-base streak in Major League Baseball and also the second-longest such streak this year, behind a 40-game run by Odubel Herrera of the Philadelphia Phillies earlier.

Choo is now batting .279 with 14 homer and 36 RBIs for the season. He is seventh in the American League with a .391 on-base percentage and third with 51 walks.

The hot month has the trade rumor mill spinning for Choo, who is seen as a potentially useful bat for playoff contenders in the second half push. The Rangers, despite their seven-game winning streak, are in last place in the AL West at 34-44.

Choo, 35, was once considered untradable because of his seven-year, $130 million contract signed in December 2013, but US reports now say the Rangers are willing to eat up some part of Choo's remaining salary to deal him.

Choo is making $20 million this year and is owed $42 million over the next two years. (Yonhap)