ROSTOV-ON-DON, Russia -- South Korea's World Cup hopes may just have been dealt another blow after a 2-1 loss to Mexico on Saturday, with their captain Ki Sung-yueng leaving the match on crutches with a leg injury.

Ki, a long-time midfield stalwart who won his 104th cap on Saturday, suffered a left calf injury during the match at Rostov Arena in Rostov-on-Don. He passed through the mixed zone on crutches without speaking to reporters. 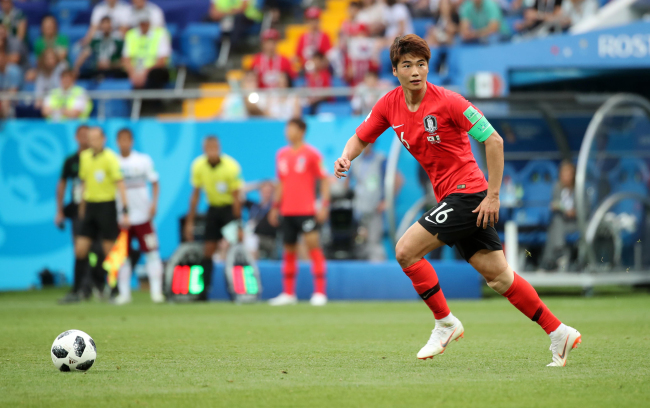 South Korean midfielder and captain Ki Sung-yueng controls the ball during a Group F contest against Mexico at the FIFA World Cup at Rostov Arena in Rostov-on-Don, Russia, on June 23. (Yonhap)
During his post-match press conference, head coach Shin Tae-yong said he wasn't sure if Ki would be 100 percent fit for South Korea's final group match against Germany next Wednesday.

A national team official said the exact nature or severity of Ki's injury wasn't yet known and that the player will have to undergo further tests.

"At this juncture, we are not sure exactly when he sustained the injury, and how much treatment and rehab he will need," the official added.

Ki and the rest of the team flew back to their base camp in Saint Petersburg after the loss, which pushed the Taeguk Warriors to the brink of early elimination.

South Korea can ill afford to lose Ki in the crucial contest against Germany. The versatile star is a field general for South Korea, thanks to his defensive prowess and offensive instincts. (Yonhap)