In his summit with Xi in Beijing on Tuesday, North Korean leader Kim Jong-un expressed gratitude for China's support for his historic meeting with US president Donald Trump last week and vowed to further consolidate bilateral ties with China, according to the Korean Central News Agency. 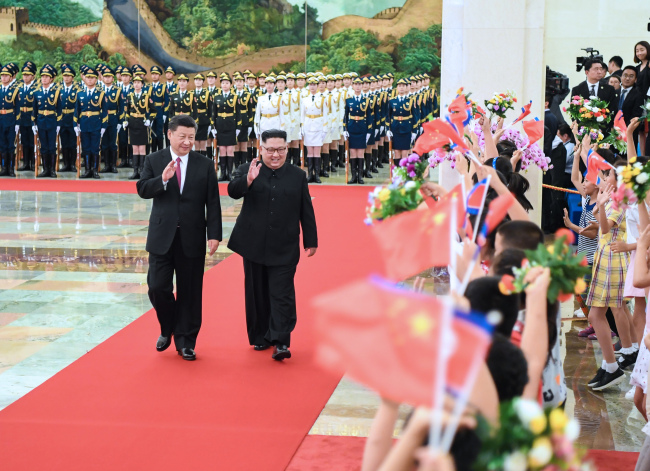 Chinese President Xi Jinping, left, and North Korean leader Kim Jong-un. (Yonhap)
The KCNA provided an extensive report on the summit, a day after Kim and Xi met in Beijing in their third meeting in three months. Kim is on a two-day trip to Beijing from Tuesday.

The meeting came a week after Kim met with Trump in a historic summit in Singapore on June 12, in which Kim affirmed his commitment to complete denuclearization of the Korean Peninsula and they agreed to build "new" bilateral relations.

"Xi expressed strong support for our stance and determination for denuclearization of the Korean Peninsula, saying that China will continue to play a constructive role," it added. "The talks were held in a cordial, open-minded and friendly mood." 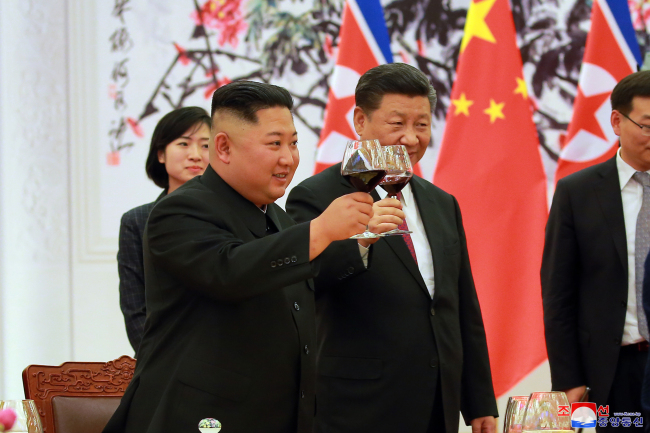 North Korean leader Kim Jong-un and Chinese President Xi Jinping make a toast during an official welcoming dinner in Beijing on Tuesday. (Yonhap)
The KCNA said that Kim appreciated China for providing strong support for making his summit with Trump a success, while reiterating the recently strengthened strategic cooperative ties between the two countries and vowing to advance such close and friendly ties going forward.

Kim said that North Korea will closely cooperate with China "in the process of opening a new future on the Korean Peninsula and in the region" and do his best to protect a "genuine peace" going forward.

The KCNA added that the two leaders exchanged views on issues of mutual concern, including the prospects for denuclearization of the Korean Peninsula, and reached consensus on those discussed issues.

Kim's trip to China is seen as an apparent bid to strengthen bilateral ties with China ahead of the North's high-level talks with the US to discuss details on how to dismantle its nuclear weapons programs. 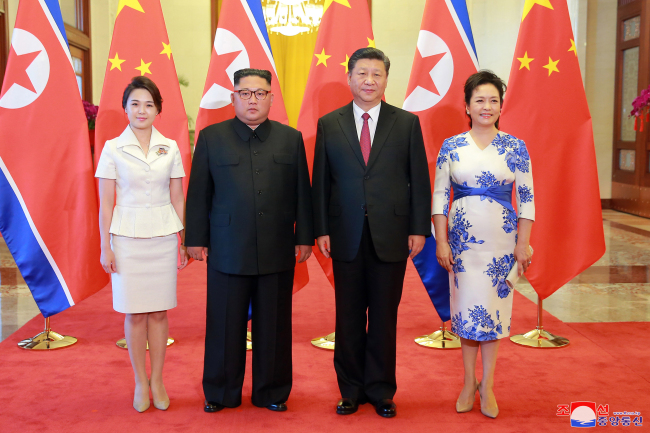 North Korean and Chinese leaders pose with their spouses at a welcoming ceremony in Beijing on Tuesday. (Yonhap)
China also appears to be working hard not to be marginalized in the fast-paced nuclear diplomacy surrounding the Korean Peninsula by bringing the North closer to its side after years of chilled relations over Pyongyang's nuclear and missile provocations.

Kim traveled to China in March and met with Xi in his first foreign trip since he took over the country in late 2011. The two also met in May ahead of Kim's summit with Trump.

The KCNA provided detailed coverage of Kim's trip to Beijing and the summit with Xi, including when he arrived there and who accompanied him on the two-day visit.

Earlier, Chinese media showed footage of Xi and his wife, Peng Liyuan, greeting Kim and his wife, Ri Sol-ju, at the Great Hall of the People, and Kim inspected a Chinese honor guard.

The move marked a clear departure from China's previous stance of keeping silent on Kim's visit until he had returned home. His visits have long been held in secrecy, apparently for security reasons.

The KCNA did not provide detailed information on the itinerary for the second day of his trip. (Yonhap)