South Korea announced Friday it will seek to professionalize its traditional martial art of taekwondo and make it more accessible to a wider population.

The ministry said it will look for ways to make taekwondo a professional sport, with financial independence ensured through corporate sponsorships and broadcasting rights fees, and launch a new channel called "Internet Taekwondo TV," which will carry live or taped coverage of taekwondo matches and deliver taekwondo-related news. 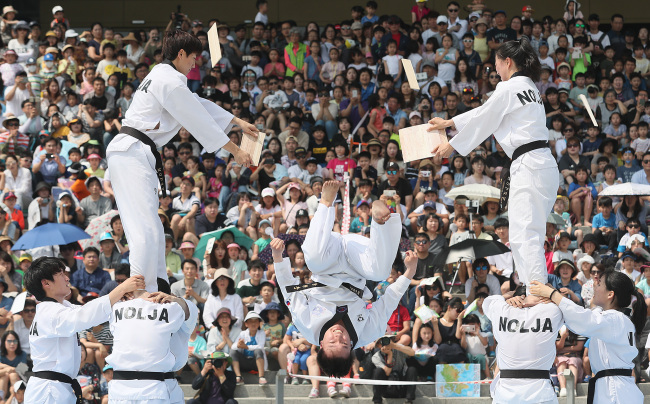 In this file photo from June 6, 2018, taekwondo demonstrators perform at the War Memorial of Korea in Seoul to mark Memorial Day. (Yonhap)
The ministry will also offer support efforts to make taekwondo more spectator friendly through new competition formats.

The ministry added it will try to expand taekwondo at the grassroots level, strengthen its global leadership and reform the support system for taekwondo.

To that end, the government will provide 17.8 billion won ($16.4 million) of the budget this year, and the number will increase by an average of 24 percent annually over the next five years, for a total of 173.2 billion won through 2022.

Noting that practicing taekwondo has mostly been the domain of children, the ministry said it will make the martial art more accessible and allow adults and seniors to enjoy it as well. The ministry added it will look to start a weekend taekwondo league pitting amateur practitioners against one another.

And to develop taekwondo into cultural content, the ministry plans to support production of performances, TV dramas and webtoons based on the martial art.

The ministry's plans also include the staging of the annual "Taekwondo Leaders' Forum," which will bring together taekwondo masters from around the world. Elsewhere, South Korea will look to expand its taekwondo exchanges with North Korea and establish a steady communication channel.

A special task force formed last September, with representatives from taekwondo organizations, scholars, journalists and other experts on hand, came up with these policy goals. The sports ministry said it will continue to make adjustments to meet changing environment demands, and to come up with and implement plans to develop taekwondo. (Yonhap)