[ The Korea Herald – Send E-mail ]
Moon says he will double efforts to implement pledges following election victory
By Yonhap
Published : Jun 14, 2018 - 15:08
Updated : Jun 14, 2018 - 15:08
President Moon Jae-in renewed his promise to honor his own election pledges Thursday, noting that a landslide victory by the ruling Democratic Party in the local elections may have shown public support for some of his government and the ruling party but not all.

"The people have given the government a great strength. The support the people have shown feels heavier than ever after learning that the turnout rate was the highest in 23 years for local elections," the president said in a released statement.

The special message came hours after the National Election Commission announced the official outcome of the local elections held the day before.

The ruling party swept 14 out of the 17 major races for the top administrative posts at provincial and metropolitan city governments, while also grabbing 11 out of 12 parliamentary seats in Assembly by-elections held concurrently with the quadrennial gubernatorial and mayoral elections. 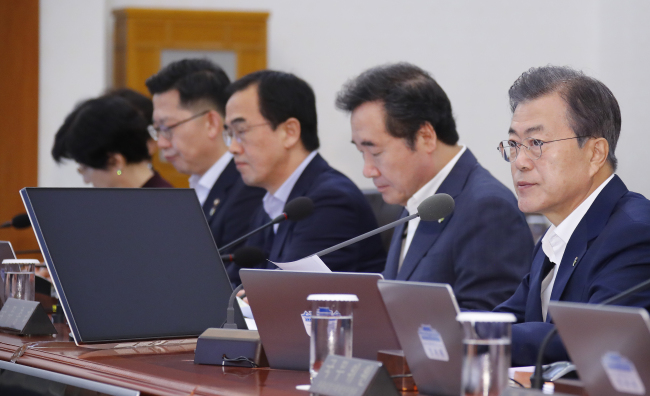 (Yonhap)
Moon acknowledged the victory did not mean public approval of all his policies.

"I am well aware of the fact that the support does not mean overall approval of state management. They have shown us their faith though there must be many areas they are not happy with. That is why I am more grateful and more sorry," the president said.

"I will once again clear my mind. I will try harder. I will especially remain vigilant so I will not be complacent about the outcome of the elections or be indolent," he added. (Yonhap)