Traveling to the thriving capitalist island nation, having a one-on-one meeting with Singaporean Prime Minister Lee Hsien Loong and touring key attractions of the city-state may have been instrumental in expanding his diplomatic horizons, experts say. 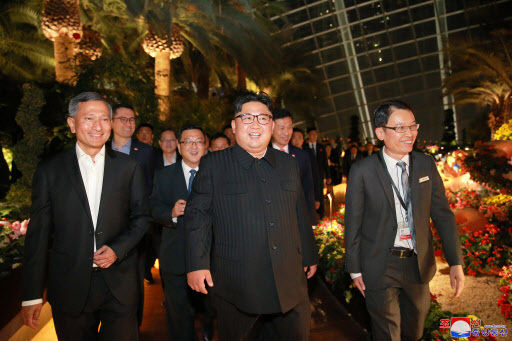 (Yonhap)
Kim’s nighttime stroll on the Singapore waterfront late Monday night only hours before the high-stakes meeting with Trump also signals what he has in mind for his impoverished country’s future -- economic development by boosting tourism.

Kim, who spent much of the day out of public view, stepped out of the St. Regis Hotel, where he was staying, around 9 p.m. He toured major attractions such as the Flower Dome at Gardens by the Bay and Sky Park on the rooftop of Marina Bay Sands. 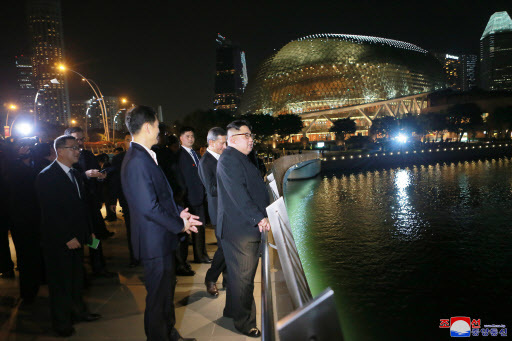 (Yonhap)
Kim was accompanied by close aides including his sister Kim Yo-jong and Kim Yong-chol, vice chairman of the Central Committee of the Workers’ Party of Korea, according to North’s Korea Central News Agency. He was escorted by Singaporean Foreign Minister Vivian Balakrishnan.

During the two-hour tour, Kim Jong-un could be spotted waving at passers-by taking pictures and recording him with their phones. Photos of Kim taken by tourists emerged on social media. Balakrishnan himself tweeted a picture taken with the North Korean leader.

Until a few months ago, the young leader was largely seen as reclusive and merciless, leading the world’s most secretive country and threatening to start a nuclear war. After months of fast-paced diplomacy, Kim found himself in Singapore for a summit with Trump.

“The walkabout tour was a crafted move to present himself as a normal leader of a normal country, as part of its propaganda campaign,” said Myong-hyun, a researcher at the Asan Institute for Policy Studies.

North Korean media, unusually quick to give an extensive report on Kim’s nighttime tour, reported Tuesday that Kim had learned about “social and economic development” through the tour of Singapore.

Praising Singapore’s “clean and beautiful” environment, Kim vowed to “learn a lot from the good knowledge and experience of Singapore in various fields in the future,” the KCNA said. 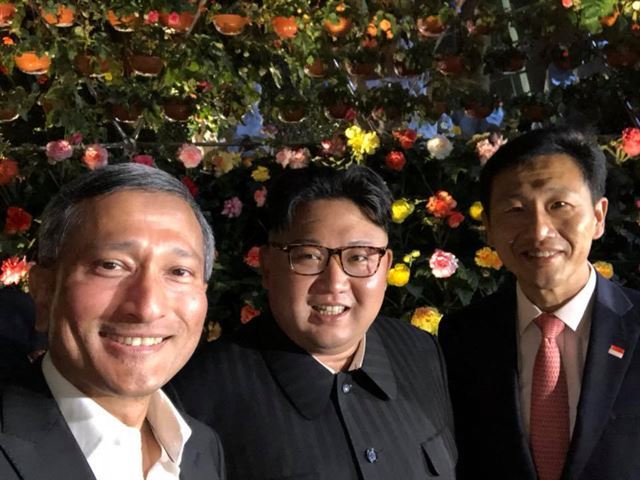 (Singaporean Foreign Minister Vivian Balakrishnan's Facebook)
“A key part of Kim Jong-un’s plan for the country’s economic development is boosting tourism. Tourism is the easiest way to make profit without much investment,” said Cho Han-bum, a researcher at the Korea Institute for National Unification, referring to Kim’s recent push for constructing a tourism zone connecting Wonsan and Kumgangsan.

“Tourism is a major industry in Singapore, so it might have been a symbolic move for the North Korean leader to show his push for tourism,” he said.

Singapore has demonstrated the compatibility between a free market economy and single-party rule. Tourism is a major contributor to the country’s economy, where per capita income stood in the global top 10 at about $53,000 in 2016.

“I think Kim Jong-un could refer to Singapore as one of the examples for North Korea’s economic development,” said Koh Yu-hwan, a professor at Dongguk University.