With North Korea’s leader Kim Jong-un and US President Donald Trump in Singapore for a summit on Tuesday, there is hope and caution over whether the historic meeting will lead to resolving the nuclear standoff and decadesold animosity.

Expectations are higher than ever that the summit -- scheduled to take place on the city state’s resort island of Sentosa -- will pave the way for peace and stability on the Korean Peninsula and the surrounding region.

Yet, Pyongyang and Washington remain at odds over the terms for denuclearization, fueling concern that the summit might end up being a public stunt staged by the two unpredictable leaders.

Whether the event in Singapore turns out a success or not, it is certain the Trump-Kim meeting will shape the future trajectory of the inter-Korean relations and regional dynamics in East Asia.

If the Trump-Kim summit achieves a diplomatic breakthrough and economic sanctions on the reclusive regime are lifted, the two Koreas could speed up efforts to improve their ties on security and economic front.

However, the prospect of the cross-border cooperation is unlikely if the summit falls short of achieving complete, verifiable and irreversible denuclearization -- a pre-condition for the US sanctions relief.

The Moon Jae-in administration, which has played a supporting role in the lead up to the on and off and on- again meeting between Trump and Kim, appears to acknowledge that any progress on inter-Korean relations is largely dependent on whether tangible results are achieved at the summit.

The Moon administration is seeking to hold a series of cross-border talks aimed at easing military tension, fostering cultural and sport exchanges, and holding a reunion of Korea War- separated families. 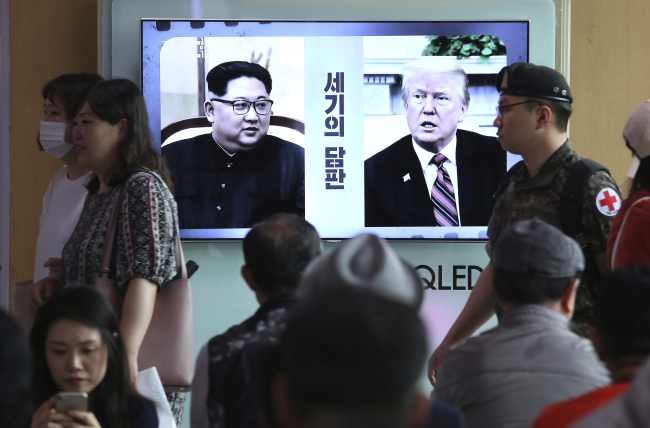 Viewers look on at a TV screen showing file footage of US President Donald Trump (right) and North Korean leader Kim Jong Un during a news program at Seoul Railway Station in Seoul on Monday. (AP-Yonhap)
Starting with general-level military talks scheduled for Thursday, the two Koreas are scheduled to discuss joint participation of the Asian Games and hold a Red Cross meeting for the reunion of the separated families on June 22.

Also on the list is a follow-through on the pledge to restore the now-defunct railways between the two Koreas. During their first summit in April, Moon and Kim agreed to take “practical measures” to connect and modernize the railways.

“But it is still too early for us to talk about economic cooperation with North Korea as economic sanctions are still in place. We should all wait and see how the Trump-Kim summit plays out.”

However, the prospect of immediate sanctions relief is not likely even if North Korea made “significant progress” on denuclearization as there are many stakeholders involved in the process.

Lifting US sanctions requires approval from Congress. The Trump administration also needs to work with the international community as there are sanctions imposed by the United Nations. 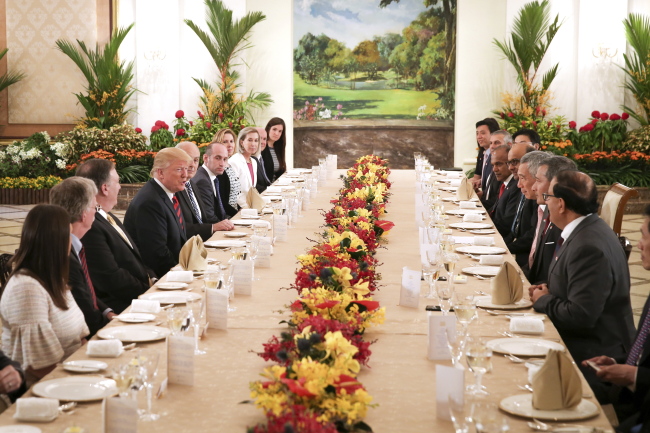 US President Donald J. Trump (4-L) and Singapore Prime Minister Lee Hsien Loong (4-R) meet for a working lunch at The Istana (presidential residence) in Singapore on Monday. (EPA-Yonhap)
The prospect of sanctions relief and inter-Korean economic cooperation depends on how serious Kim Jong-un is about denuclearization and how willing he is to make good on his pledge, according to an analyst.

“There’s no guarantee that even significant progress would lead to any specific sanctions relief …Other actors have a voice in that -- e.g. the US Congress, US allies, and China,” said Michael Mazarr, associate director of the strategy and doctrine at the RAND Corporation,

“Obviously there is a good deal of diplomacy going on between the two Koreas on various fronts. It depends though on how significant the denuclearization steps are, how much Kim projects a commitment to change.”

It is not just the inter-Korean relations that will be affected by the outcome of the Trump-Kim summit. The meeting will have a profound impact on the regional dynamics beyond that of the Korean Peninsula.

At the center lies the growing rivalry between China and the US in Asia. The two countries have engaged in strategic competition as bilateral tension has spiked over Chinese military fortifications on man-made islands in the South China Sea.

While a successful Trump-Kim summit can leave Beijing feeling more secure about dealing with a nuclear-armed North Korea, the unprecedented detente would not necessarily serve the interest of China as it is concerned about North Korea being too close with the US, analysts said.

“China worries that NK will begin to lean toward the US as this process unfolds,” said Ken Gause, an expert on North Korea‘s leadership and a director of International Affairs Group at CNA, a research group based in Virginia.

North Korea’s changed attitude was seen in its view of US troops stationed in South Korea. Unlike his predecessors, Kim Jong-un has not publicly demanded the US troops’ withdrawal in return for abandoning its nuclear arsenal. 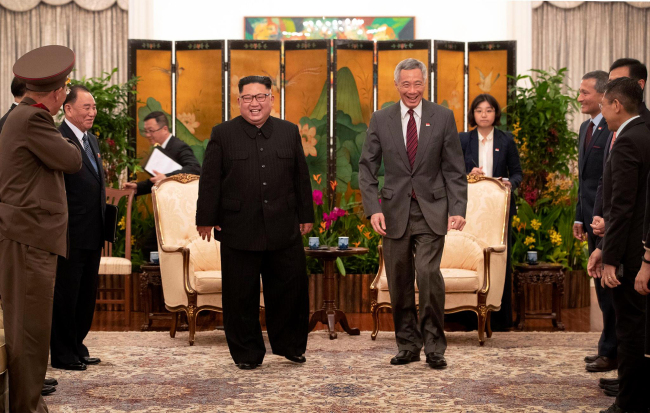 Prime Minister Lee Hsien Loong of Singapore meets with North Korean leader Kim Jong Un on Monday in what was a first meeting between the two leaders. (Yonhap)
“Kim knows that once the US leaves the peninsula, Beijing’s calculus is likely to change, and not necessarily in North Korea’s favor. Pyongyang will no longer be able to play the US off China to its own advantage. Therefore, Beijing has concerns about Kim’s end game.”

Kim’s shift in tone raises the possibility that he would eventually accept the presence of US troops in South Korea as a balance against China‘s influence, provided that the US forces change its role from that of defending South Korea against the North to that of maintaining stability in East Asia.

Such a scenario is an alarming one for China and has prompted its policymakers to leverage the upcoming US-North Korea summit as an opportunity to push out US troops -- or at least scale down the forces, Gause said.

“Xi wants to ensure that the foundation is laid so that the US begins to draw down on its own and once the US footprint is removed from the Korean Peninsula, the US anchor in Asia will be gone and China can expand its influence much more easily. 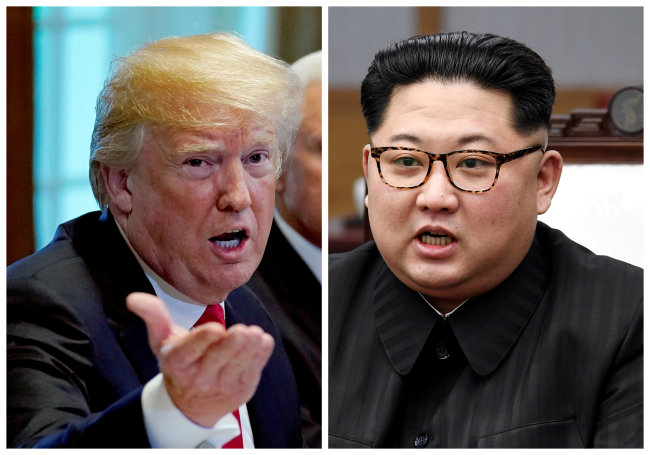 US President Donald Trump and North Korea`s leader Kim Jong-un. (Yonhap)
Still, some Chinese analysts believe that even if the summit improves US-North Korea ties, China has enough leverage to continue exercising influence on North Korea and is expected to play a bigger role on the Korean Peninsula.

Concerns appear to grow in China over being sidelined in a potential diplomatic breakthrough on the Korean Peninsula. Beijing has demanded it should be involved in the process, including an official declaration of end to the Korean War, as a legitimate signatory to the current armistice agreement.

Based on its economic and security ties with North Korea, Beijing is able to exercise influence on North Korea by assuming the role of a guarantor to ensure the security of the Kim Jong-un regime, the experts said.

“China will help both sides to meet their promises -- it will be a guarantor and a mediator to ensure that any deals that are made at the summit are well implemented,” Lu Chao, a Korean affairs specialist at the Liaoning Academy of Social Sciences, told the South China Morning Post.