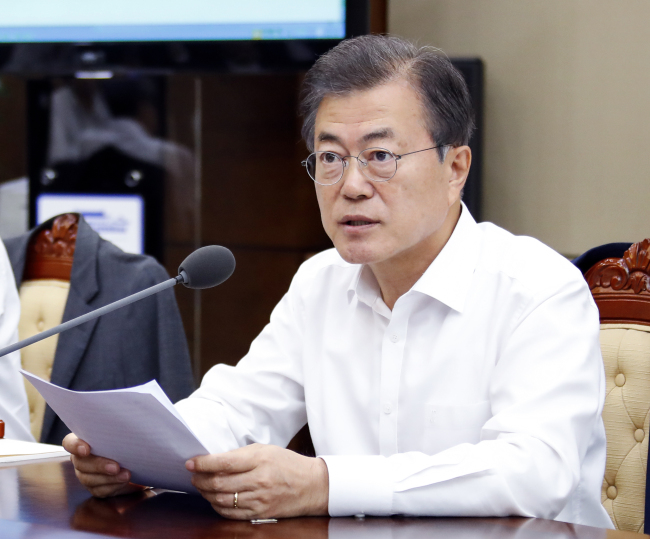 South Korean President Moon Jae-in presides over a meeting on Monday with his senior secretaries at the Presidential Blue House in Seoul, a day before the Kim-Trump summit in Singapore. Yonhap
The ruling Democratic Party of Korea holds an advantage at the June 13 local elections on the back of optimism on rapprochement between the two Koreas.

Optimism is high among the party’s candidates that the elections will prove a landslide, aided by widespread support for President Moon Jae-in, whose role as a mediator in resolving the standoff over Pyongyang’s pursuit of nuclear weapons is expected to be highlighted after the summit.

Public polls show overwhelming leads for candidates from the ruling camp, whose members include Moon.

Even in traditionally conservative strongholds, such as Daegu, the main conservative opposition Liberty Korea Party’s candidates are being closely trailed by their liberal counterparts, according to polls.

The change in sentiment among right-leaning voters is largely based on growing hopes for a permanent peace on the Korean Peninsula, as Moon has helped broker the first-ever summit between the two unconventional leaders of the US and North Korea to be held as scheduled in Singapore.

Overshadowed by the Trump-Kim summit and with less focus on candidates’ creative policies or pledges, the upcoming local elections could end up seeing fewer voters in general, according to Bae.

“The potentially low turnout for the upcoming local elections is not an ideal situation for the ruling party, whose main support base is young voters, as it hopes for a landslide victory across the country,” Bae added.

The Trump-Kim summit is “such a mega political event” that it will surely garner more attention than the domestic elections, according to Myongji University political science professor Shin Yul.

“Besides the voter turnout, the summit itself might give less advantage to the ruling party than is expected, as voters will have little chance to evaluate its result, which will be revealed during or after the elections Wednesday,” Shin added.

Figures for early voting turnout have been not so bad.

“The Moon administration should not ignore its failure to improve the economy and gloss over the truth on the back of North Korea issues,” floor leader of the main opposition party Kim Sung-tae said at a party meeting Monday.

At Wednesday’s local elections, candidates will be competing for 4,016 local administrative, legislative and educational seats, including 17 metropolitan mayors and provincial governors.

The elections is widely seen as an evaluation of the first year performance of the Moon administration, which has pushed consistently for dialogue with Pyongyang.

Moon had pledged to take the “driver’s seat” to push for denuclearization of the Korean Peninsula during the 2017 presidential election.