[ The Korea Herald – Send E-mail ]
Prosecution reopens Jang Ja-yeon sexual abuse case
By Jo He-rim
Published : Jun 5, 2018 - 17:22
Updated : Jun 5, 2018 - 18:37
The prosecution said Tuesday it is reinvestigating the controversial sexual abuse case involving the late actress Jang Ja-yeon. The initial investigation into the case concluded nine years ago amid criticism that it failed to punish any of the alleged suspects.

The move comes after a special independent panel at the Ministry of Justice looking into past rulings recommended late last month to reinvestigate the case before the statute of limitations against one of the suspects -- a journalist-turned-politician -- runs out on Aug. 4. 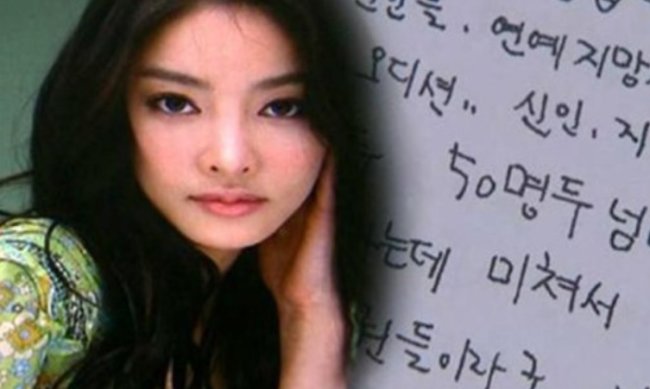 Late actress Jang Ja-yeon (captured from MBC)
The investigation is being led by chief prosecutor Hong Jong-hee at the Seoul Central District Court’s Office, and all records of the case that were kept in the Suwon District Prosecutors’ Office were transferred to Seoul, according to the prosecution.

In 2009, the rookie actress, who was starring in the popular KBS drama series “Boys Over Flowers,” took her own life. She left behind seven pages of handwritten notes, which allegedly revealed that she had been forced by the head of her agency to provide sexual favors to high-profile media executives.

The notes included details on the men she was coerced into having sexual relations with, and the places where such meetings occurred. Names listed by Jang included nine prominent figures, including a president of a newspaper, triggering a prosecutorial investigation.

The prosecution charged only the agency’s chief and Jang’s manager without detention, and the prominent figures whose names appeared in the notes were left unscathed.