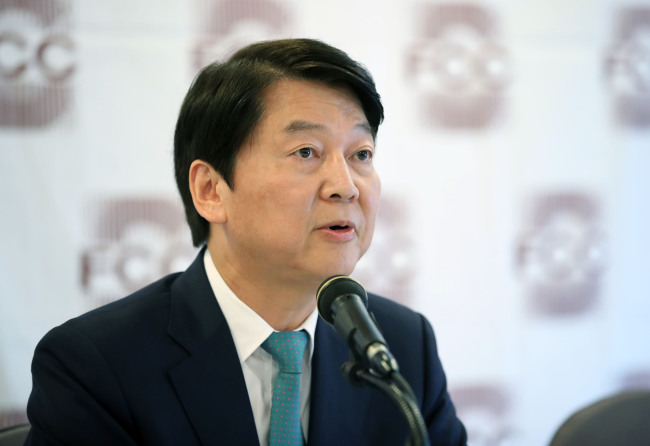 Ahn Cheol-soo of the minor opposition Bareumirae Party speaks Monday at a meeting with Seoul-based foreign journalists in Seoul. Yonhap
Ahn of the minor center-right opposition Bareunmirae Party who has been outspoken in denouncing the liberal Seoul mayor Park Won-son pointed out that during seven years of Park’s mayorship, Seoul has been “preoccupied with restoring its fortress walls of the 19th century and regenerating the city of the 20th century.”

“When mega-cities around the world are fiercely competing for innovation, Seoul has lost its existence as a global city in this era of the fourth industrial revolution,” Ahn said. “If Park gets four more years, Seoul will not be able to recover. So, I feel like I should give him a rest,” the mayoral hopeful said.

In regards to his approach to North Korea issues, Ahn said the governments of South Korea and the US should push for the “complete, verifiable and irreversible denuclearization” of North Korea in the upcoming US-North Korea summit scheduled for June 12 in Singapore.

“Three things must come together in the summit,” Ahn said. “First thing is a complete, verifiable and irreversible denuclearization (of North Korea). Second thing is no weakening of the US-South Korean security alliance. And finally, no lifting of any sanctions against the North before they begin taking action to give up its nuclear program.”

Ahn told reporters the US forces in Korea (USFK) should stay in South Korea to maintain stability and peace even after a peace treaty is signed to end the Korean War.

Amid growing speculation that the declaration of the end of the Korean War and a peace agreement might be considered along with the denuclearization of North Korea at the upcoming summit, Ahn said the USFK is a cornerstone for peace on the Korean Peninsula and a strong symbol of the two countries’ alliance, and should remain stationed for a “considerable period of time” even after a peace treaty is concluded.

Ahn added the governments of South Korea and the US should be able to cooperate closely in the process of denuclearizing North Korea.

“When President Trump canceled the North Korea-US summit, our diplomacy and security team was not informed and was left helpless. Many South Koreans are worried whether the two governments will be able to cooperate closely. The first thing the two governments should do immediately is to remove any such discoordination,” Ahn added.

The former presidential candidate is running in a nine-way race that includes incumbent Seoul mayor Park Won-son, who is the front-runner, and former Gyeonggi Governor Kim Moon-soo, among others.