The United States delegation to summit preparation talks held a third round of talks with North Korea's team in the border village of Panmunjom earlier in the day, sources said Saturday.

The US delegation, led by Sung Kim, US ambassador to the Philippines, held talks with the North's team, led by Pyongyang's Vice Foreign Minister, Choe Son-hui, at the same place on Sunday and Wednesday.

Saturday's talks were known to have taken place from 10:00 a.m. to 4 p.m., according to the sources. 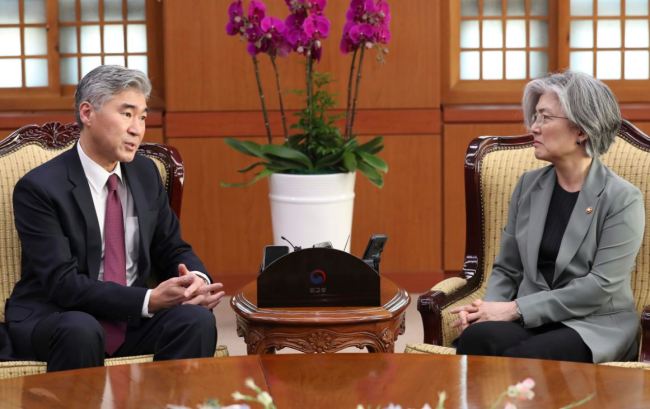 South Korean Foreign Minister Kang Kyung-wha (R) holds talks with US Ambassador to the Philippines Sung Kim at her office in Seoul on June 1. (Yonhap)
Earlier, Kim said the discussion is "moving in the right direction," but added that there is still "much work" left before nailing down the summit between US President Donald Trump and North Korean leader Kim Jong-un, to be held on June 12 in Singapore.

Over the past week, Washington and Pyongyang have held a series of talks to prepare for the summit, including in Singapore and New York.

Trump on Friday put the historic summit back on for June 12 following weeks of uncertainty over whether it would take place.

"We'll be meeting on June 12th in Singapore," Trump told reporters on the White House grounds after seeing off Kim Yong-chol, a close aide to the North Korean leader. "And I think it'll be a process. I never said it goes in one meeting. I think it's going to be a process. But the relationships are building, and that's a very positive thing." (Yonhap)