[ The Korea Herald – Send E-mail ]
Moon may travel to Singapore for three-way summit to declare end of Korean War
By Yonhap
Published : May 31, 2018 - 09:19
Updated : May 31, 2018 - 09:29
South Korean President Moon Jae-in may travel to Singapore next month to hold a three-way summit with his US and North Korean counterparts, Seoul officials noted Thursday, possibly suggesting that Washington and Pyongyang may currently be considering a formal end to the Korean War as an incentive to the North for its denuclearization.

An official from the presidential office Cheong Wa Dae said nothing has yet been decided when asked if President Moon planned to visit Singapore for a three-way summit with US President Donald Trump and North Korean leader Kim Jong-un, who are expected to hold a bilateral summit there on June 12.

However, the official said the president will make a trip if there is an invitation from the US and North Korea. 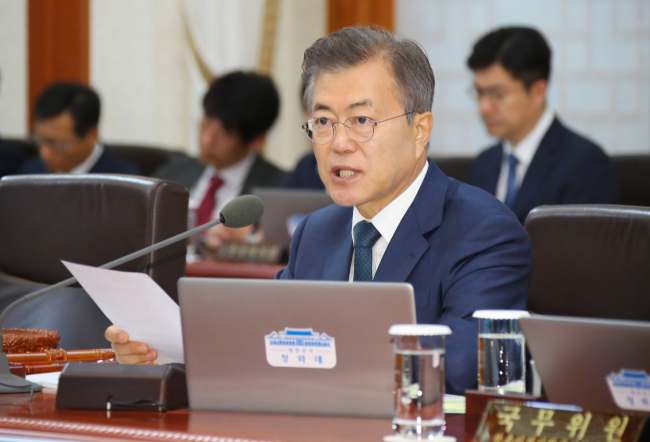 (Yonhap)
"We plan to make preparations (for a trip) when there is an invitation though we still do not know whether there will be one," the official told reporters while speaking on condition of anonymity.

The official denied any ongoing preparations, saying, "We have no plans to prepare for a three-way summit in advance."

Still, another Cheong Wa Dae official has said Moon's trip depends on the outcome of ongoing discussions between the US and North Korea.

The pre-summit talks between Washington and Pyongyang were resumed shortly after Trump called off his meeting with Kim, meaning the talks are aimed at deciding the very fate of the scheduled summit, which, in turn, apparently suggests they may also include discussions on whether Moon's presence will be needed.

Cheong Wa Dae officials have said Moon's trip to Singapore, if made, will be aimed at formally ending the Korean War in a three-way summit with the US and North Korean leaders.

The US and North Korea concluded their working-level discussions Wednesday.

Possibly signaling an amicable outcome of the talks, Kim Yong-chol, a vice chairman of North Korea's ruling Workers' Party, arrived in New York on Wednesday for high-level talks with US

Secretary of State Mike Pompeo, becoming the highest-ranking North Korean official to visit the US since 2000.

On Wednesday, Cheong Wa Dae confirmed one of its officials was currently in Singapore.

It said the Cheong Wa Dae official was only on a mission to prepare for Moon's official visit to the Southeast Asian nation in July, but many believe the trip may be partly aimed at preparing for a three-way summit between the two Koreas and the US.

Moon and Kim have held two rounds of inter-Korean summits, on April 27 and May 26.

Following their latest meeting, Moon said the North Korean leader still held uncertainties toward a US promise to guarantee his country's safety following its denuclearization.

The South Korean president also renewed his hope to formally end the 1950-53 Korean War in a three-way summit with Trump and Kim, implying it could partly help ensure the North's safety.(Yonhap)