The department’s annual International Religious Freedom Report for 2017 revealed 1,304 cases of alleged religious freedom violations in North Korea last year, while detailing the harsh treatment of political and religious prisoners, as well as persecution of Christians.

“The government continued to deal harshly with those who engaged in almost any religious practices through executions, tortures, beatings and arrests,” the report read.

“An estimated 80,000 to 120,000 political prisoners, some imprisoned for religious reasons, were believed to be held in the political prison camp system in remote areas under horrific conditions.” 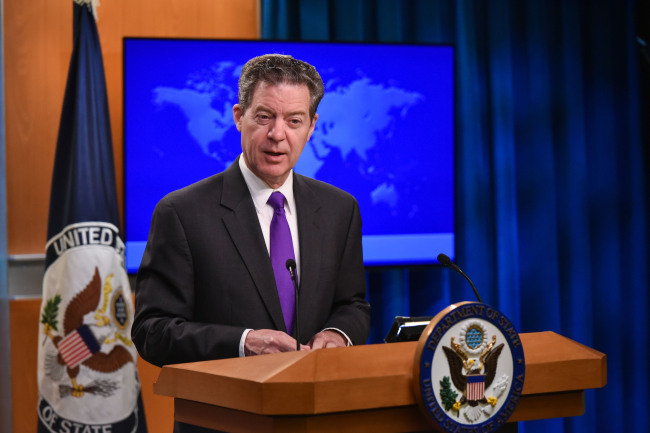 (Yonhap)
Under the International Religious Freedom Act, the US government has assessed the level of religious freedom in other countries each year. It has designated North Korea as a “country of particular concern” every year since 2001.

The report is based on research by the United Nations’ Commission of Inquiry on Human Rights in the Democratic People’s Republic of Korea, nongovernmental organizations, testimonies by North Korean defectors and media reports.

The annual report was released months earlier than usual amid growing chances of a summit between US President Donald Trump and North Korean leader Kim Jong-un in June. The 2015 and 2016 reports were released in August.

In response to a question on whether the issue of political prisoners will be raised during the summit, Sam Brownback, US Ambassador-at-Large for International Religious Freedom, said in a press briefing on Tuesday that he expects it to be.

“What we know is that you’ve got a gulag system operating in North Korea, and it’s been a terrible situation for many years,” Brownback said.

“You can go on open-source satellite, and see some of these camps and the situation. You have people that have gotten out and have written about the situation in North Korea.”

The US State Department also said it will host the first ever Ministerial to Advance Religious Freedom in July.

US Secretary of State Mike Pompeo announced during the press briefing on the report that he will host his counterparts from likeminded governments as well as representatives of international organizations, religious communities and civil society to identify “concrete ways to push back against persecution.”

“Religious freedom is indeed a universal human right that I will fight for,” Pompeo said.

“The United States will not stand by as a spectator.”