President Moon Jae-in on Wednesday met with top US security and foreign affairs officials and asked for their support in matters surrounding North Korea.

At the meeting with US Secretary of State Mike Pompeo and National Security Advisor John Bolton, Moon requested their support for the upcoming US-North Korea summit. The summit is set to be held in Singapore on June 12. 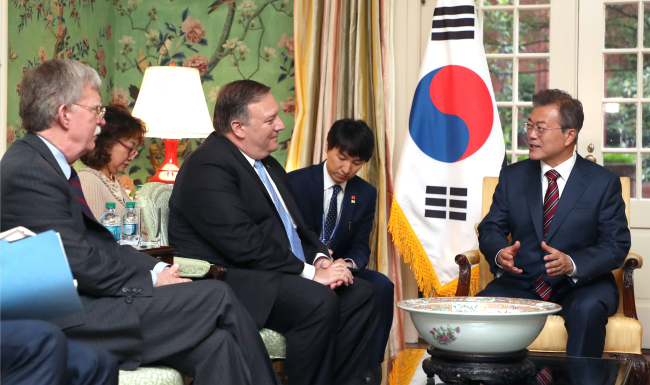 President Moon Jae-in speaks with US Secretary of State Mike Pompeo and National Security Advisor John Bolton in Washington DC on Tuesday. Yonhap
“At a time that can decide the future and fate of South Korea and the Korean Peninsula, the people of Korea have high expectations for the two of you,” Moon was quoted as saying by Cheong Wa Dae. The meeting was held in Washington DC on Tuesday (US time), ahead of Moon’s summit with US President Donald Trump.

In the meeting, Moon said that North Korean leader Kim Jong-un remains committed to dialogue with the US, despite recent developments, and urged Bolton and Pompeo to continue preparing for the Kim-Trump summit.

“Moon said that positive changes on the Korean Peninsula are presenting unprecedented opportunities for South Korea and the US to set the course of the history of the peninsula on the path to denuclearization and lasting peace,” Yoon Young-chan, Cheong Wa Dae’s chief press secretary, said in a statement.

According to Yoon, Moon also stressed that the planned talks between Pyongyang and Washington are “on a new dimension” compared to previous negotiations in that North Korea will be represented by Kim, who publicly announced intent to denuclearize.