North Korea declined to accept the list of South Korean journalists chosen to cover the dismantling of its nuclear test site Tuesday, making it technically hard for the South Korean media to join the event scheduled for this week.

"We tried to convey the list through the Panmunjom communication channel at 9 a.m. today, but the North declined to accept it," a unification ministry official said on condition of anonymity.

As the North declined to accept the list, South Korean media is highly likely to be excluded from covering the event that the North is planning to hold this week.

"It appears to be technically difficult (for the South Korean reporters) to make a trip to the North today," a government official said. "It is regrettable." 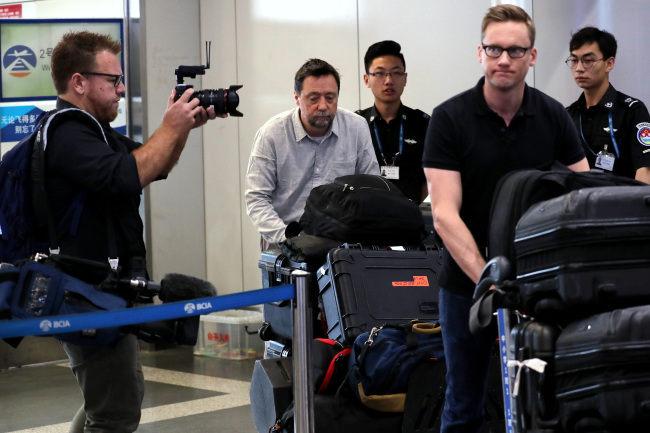 Will Ripley (front, right) from CNN and other foreign journalists head to catch a flight to Wonsan, North Korea, at Beijing Capital Airport on Tuesday. (Pool-Yonhap)
North Korea announced in mid-May that it will publicly shut down the test site located in the country's northern region in a ceremony to which media from South Korea, China, Russia, the United States and Britain will be invited to cover.

The North invited four South Korean reporters each from a newswire and a broadcasting company for the event to be held from Wednesday to Friday, depending on weather conditions.

The site, located in the mountainous region of the North, is where the North carried out all six of its nuclear denotation tests. Its dismantling is deemed to be a "meaningful" step toward the complete denuclearization the North promised in the April 27 inter-Korean summit.

Despite uncertainty over their trip to the North, eight South Korean journalists arrived in Beijing on Monday.

It is likely that foreign journalists excluding the South Koreans will fly to Wonsan on Tuesday on a charter plane from which they are expected to travel by train to an area near the test site. They are set to return home either on Saturday or Sunday.

The latest development comes amid worries over the North apparently returning to a provocative tone from a monthslong peaceful approach ahead of its unprecedented summit talks with the United States set for June 12.

The South Korean government expressed regret over the unilateral decision, urging the North to come out for talks as soon as possible to discuss follow-up measures to the recent summit agreement.

The North doubled down on its criticism of the South, with Ri Son-gwon, the chief of North Korea's agency handling affairs with the South, saying Thursday that talks will not happen if Seoul and Washington continue their joint military drills.

The North is apparently ramping up its preparation to host a group of foreign journalists for the dismantling ceremony.

38 North, a US website dedicated to monitoring developments in North Korea, earlier reported that satellite imagery shows that North Korea is preparing to build an observation stand for the dismantling of its nuclear test site.

North Korea is also said to be making efforts to repair and test the safety of a 270-kilometer stretch of railway between the eastern coastal city of Wonsan and Kilju in North Hamgyong Province, where the Punggye-ri site is located. (Yonhap)