[ The Korea Herald – Send E-mail ]
[Newsmaker] Seoul to ‘wait and see’ as NK threatens to freeze talks
By Kim So-hyun
Published : May 18, 2018 - 16:39
Updated : May 18, 2018 - 16:39
Seoul’s presidential office said on Friday it will “wait and see” as North Korea threatened to not hold talks with South Korea unless it stops the ongoing joint military drills with the US.

Citing the Max Thunder exercise between South Korean and US air forces as the reason, Pyongyang called off high-level talks with Seoul on Wednesday, and threatened to cancel the summit talks with Washington scheduled to be held next month in Singapore.

On Thursday, Ri Son-gwon, chairman of the North’s Committee for the Peaceful Reunification of the Fatherland, slammed the South and a former North Korean diplomat who defected to the South, suggesting his recent critical remarks against Pyongyang were another reason for the cancellation of the talks. 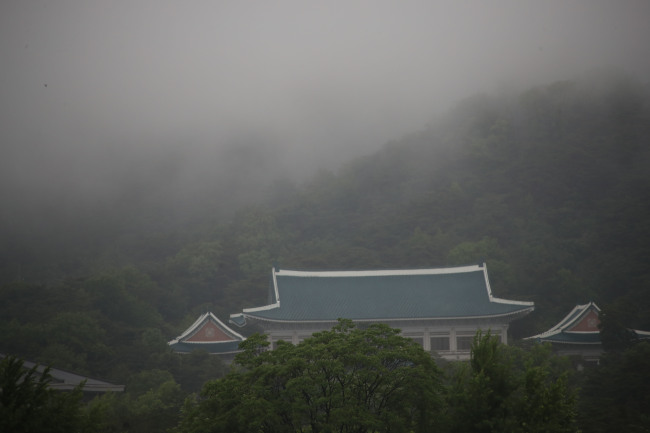 Cheong Wa Dae (Yonhap)
“Unless the serious situation which led to the suspension of the North-South high-level talks is settled, it will never be easy to sit face to face again with the present regime of South Korea,” Ri said in comments carried by North Korea‘s official Korean Central News Agency.

Thae Yong-ho, the North’s former deputy ambassador to the UK, said during a lecture at the National Assembly on Monday that it will be impossible for the North to completely denuclearize. He also held a ceremony at the parliament to celebrate the publication of his new book which is critical of North Korean leader Kim Jong-un.

“They let a human scum hurt the dignity of our supreme leadership and social system, and speak ill of the historic Panmunjeom Declaration at the National Assembly,” Ri was quoted as saying.

“The direction of the future North-South relations will entirely depend on the behavior of the South Korean authorities.”

A senior Cheong Wa Dae official told reporters on Friday that the presidential office can only “wait and see” in regard to Ri’s strong warnings against the South.

In response to a question on whether the presidential office has identified the North’s “true intention” behind the suspension of the high-level talks as it said earlier, the official said: “We don’t know, and even if we knew, it would be difficult to speak to the press about it.”

The official also said there were no immediate plans for a telephone conversation between President Moon Jae-in and Kim over the new hotline set up shortly before their summit on April 27. The two leaders were expected to have the hotline conversation before Moon’s summit with US President Donald Trump next week.

The presidential office said on Thursday that it will play a more active role as the mediator between the US and North Korea, a day after Pyongyang threatened to reconsider the planned summit talks with the US if it comes under continued pressure to “unilaterally” abandon its nuclear program.