The United States has reaffirmed that it has no plan to change the size of the 28,500-strong US Forces Korea, a Seoul official said Friday, amid the growing talk of a potential drawdown in line with ongoing peace efforts.

The reaffirmation came at the allies' third round of negotiations on sharing the cost for the upkeep of American forces that have served in the South as a major deterrent against North Korean aggression.

"While reaffirming its firm security commitment on the Korean Peninsula, the US side confirmed that it has no plan to alter the size and character of the USFK," the official told reporters on condition of anonymity. 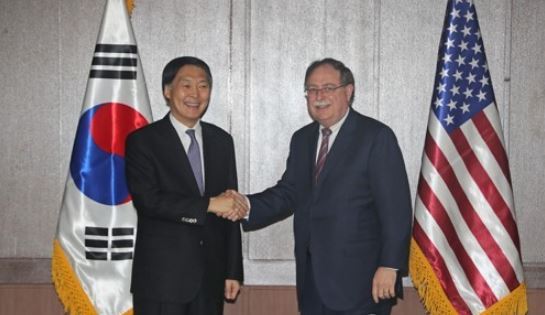 This photo, taken April 11, 2018, shows Chang Won-sam (left), the South Korean diplomat in charge of the defense cost sharing negotiations, shaking hands with Timothy Betts, deputy assistant secretary for plans, programs and operations at the US State Department, before their talks on South Korea`s southern resort island of Jeju. (Yonhap)
Their agreement has since triggered speculation over the potential need to alter the size, role, mission and modus operandi of American forces here.

The third session of the 10th Special Measures Agreement talks between the allies was held in Washington, D.C. earlier this week. The previous ones took place in Honolulu in March and on Jeju Island in April.

"The two sides shared the view that through SMA consultations, they would continue to form an environment for the stable stationing of the USFK that has played a central role for peace and security on the peninsula," the official said.

The official indicated that Seoul and Washington remain far apart over the cost-sharing issue.

"There is still a long way to go. ... It is fair to say that there has been very little progress yet in terms of the practical issues," he said.

The allies are set to hold the next round of the talks on the burden-sharing cost next month in South Korea.

The existing SMA deal is scheduled to expire at the end of this year.

South Korea has shared the financial burden for the USFK, since the early 1990s.