WASHINGTON -- US President Donald Trump said Thursday he is not considering a so-called Libya model for dismantling North Korea's nuclear weapons program and would offer strong security guarantees in return for denuclearization.

Trump made the remarks as North Korean leader Kim Jong-un has threatened to pull out of their June 12 summit in protest of US demands for "unilateral" denuclearization and ongoing military exercises between South Korea and the US.

The Libyan model, advocated by Trump's national security adviser, John Bolton, calls for a quick dismantlement of North Korea's nuclear program with no guarantee of benefits to the regime in the process. 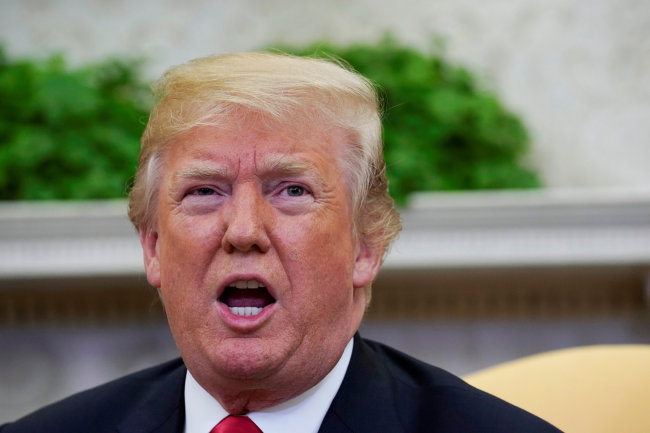 US President Donald Trump (Reuters-Yonhap)
"That model will take place if we don't make a deal, most likely. But if we make a deal, I think Kim Jong-un is going to be very, very happy," Trump told reporters at a meeting with the chief of NATO at the White House.

The US "decimated" Libya, the American president claimed, and that's not what he has in mind for North Korea.

Muammar Gadhafi renounced his nuclear weapons program in 2003, and North Korea has expressed an aversion to meeting the same fate by following in his footsteps.

Trump said the Libyan model of packing up the weapons of mass destruction facilities and shipping them to the US was a much different deal.

The US is willing to provide security guarantees, Trump added, and Kim will "get protections that will be very strong." But he declined to address the possibility of scaling back American troops in South Korea to appease the North. Pyongyang has long viewed the 28,500-strong troop presence as a threat to the regime.

"The best thing he could ever do is make a deal," Trump said of the North Korean leader.

North Korea has said it is willing to discuss denuclearization if the US removes security threats to the regime. The US wants to see the complete, verifiable and irreversible dismantlement of the North's nuclear weapons program. But Pyongyang made clear this week that it is not interested in talks aimed solely at forcing it to denuclearize, and threatened to call off the meeting.

The Trump-Kim meeting in Singapore would be the first-ever summit between the two countries.

Trump said the details of the summit, including the time and room in which they are going to meet, continue to be discussed with the North despite the about-face.

And "if the meeting happens, it happens, and if it doesn't, we go onto the next step," he said without elaborating.

Trump brandished his own deal-making skills.

"With deals -- that's what I do is deals -- with deals, you have to have two parties that want to do it. He absolutely wanted to do it," Trump said. "Perhaps, he doesn't want to do it. Perhaps they spoke with China."

Citing the North Korean leader's two trips to China in recent weeks, Trump raised the possibility that Chinese President Xi Jinping talked Kim out of the summit due to an ongoing trade row between Beijing and Washington.

At a news briefing the same day, White House press secretary Sarah Sanders said the US is "continuing to move forward with the preparations" for the summit. (Yonhap)