Hedge funds use unconventional strategies of not only intervening in the company’s board and management, but also waging proxy battles and liquidating assets. They operate around the world, pushing companies with aggressive strategies in pursuit of greater returns.

And South Korea appears to be the latest target for the “corporate hunters.”

A battle began between Hyundai Motor Group, the nation’s second-largest conglomerate, and US hedge fund Elliott on Friday, with the latter positioning itself against the former’s corporate restructuring plan.

Pushing companies with aggressive plans is the nature of hedges funds, experts say. But Elliott seems to be acting differently than the usual in other countries.

“The way they approach Hyundai is a bit different than they do in traditional markets in the US and Europe,” said Park Sang-in, an economics professor at the Graduate School of Seoul National University, who specializes in corporate governance in Korea and also works as a shareholders’ rights activist. 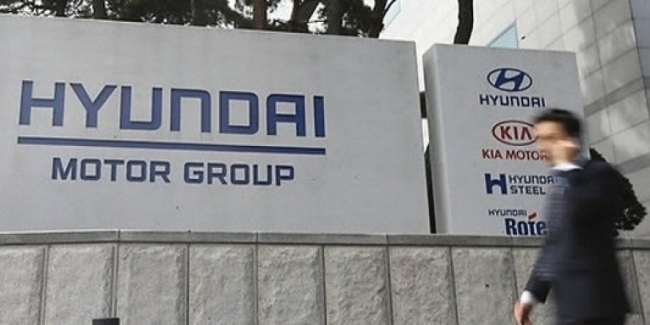 (Yonhap)
“It is not illegal to make such a proposal. But Elliott’s move seems to be purely opportunistic, seeking business opportunities by chasing after chaebol’s weakness of pursuing hereditary succession.”

The world’s fifth-largest carmaker plans to simplify its complex ownership structure, under state pressure to improve its opaque governance.

In March, the group said it would spin off Hyundai Mobis’ after-sales and module divisions and merge them with Hyundai Glovis. After the spinoff and merger, Mobis, the largest auto parts company by sales in Korea, would focus on advancing its core auto parts operations and research and development business for future technologies, including autonomous vehicles and connected cars. As part of cleaning up the complicated governance structure, Hyundai Chairman Chung Mong-koo and his son Vice Chairman Chung Eui-sun would acquire all Mobis shares held by Kia, Glovis and Hyundai Steel. The plans are subject to approval at Hyundai Mobis and Hyundai Glovis general shareholders meetings scheduled for May 29.

After weeks of preluding opposition, Elliott said in a 16-page statement Friday that Hyundai’s plan lacks business rationale, and is unfair to all shareholders. It would benefit the interests of the founder‘s descendants, the fund claimed.

Elliott’s leverage, in terms of its hold of shares in the Hyundai affiliate, however, is not so threatening, as it holds around 1.5 percent in Hyundai Mobis, Kia and Hyundai Motor, Park said.

“They can’t intervene in the management or exercise a major casting vote with such small shares. But what they want to do is to make profits by inducing a change in stock price by creating a media frenzy.”

Bruce Lee, founder and CEO of Zebra Investment, said Elliott seems to have been fully prepared before it lunged in toward Hyundai.

From the SK-Sovereign faceoff in 2005 to Samsung-Elliott, conglomerates have often found themselves vulnerable to “attacks” from foreign hedge funds.

So far, foreign hedge funds have taken issue with management-related problems to boost stock prices as controlling families and would-be reformers compete for control of the company.

Their targets were mainly family-controlled conglomerates whose controlling families owned smaller stakes than those held by foreign investors.

Thirteen years ago, Sovereign Asset Management, a major foreign shareholder of SK Corp., enjoyed about 1 trillion won ($937 million) in capital gains only 1 1/2 years after investing in SK Group’s de facto holding company. Elliott’s case with Samsung appears to be an ongoing story, as it demands the South Korean government pay over $670 million in compensation for its losses from the merger of two Samsung units in 2015.

Stakeholders here, however, appear to be largely unsympathetic to Elliott’s claims.

But what‘s clear is that hedge funds going after South Korean conglomerates’ corporate governance will increase in the future, particularly with the government’s drive on chaebol reform, Lee said.

“Most South Korean firms feel it is difficult to deal with aggressive demands from hedge funds, considering their relatively short experiences in the nation’s young capital market,” he said.

“This will go on. The state drive to reform chaebol’s opaque governance structure is an opportunity for hedge funds, as it exposes their weaknesses.”

Hyundai, for its part, has vowed to deal head-on with the latest challenge, highlighting its reform measures have been designed to maximize shareholders’ interests.

“The best shareholder-friendly policy is for us to make money, pay lots of dividends so that could boost the value of our company,” said Vice Chairman Chung Eui-sun, in a rare interview with press published Friday.

Saying he remains unfazed by Elliott, Chung went on to say, “That’s the way they do business. ... We will listen carefully and if there are proposals that bring benefits to our company and other shareholders, we will review some of that.”

Chung added that there is more to come in terms of shareholder policies, while also revealing that Mobis is “looking at four to five electronic auto parts companies for strategic mergers and acquisitions to secure a future growth driver.”

The focus is on Mobis, he stressed, comparing it to the proverbial goose that lays the golden eggs. “Now is the time to focus on rearing the goose.”