South Korean Park Sung-hyun has won a weather-shortened LPGA tournament for her first win of the 2018 season.

Park captured the 36-hole Volunteers of America LPGA Texas Classic at the Old American Golf Club in The Colony, Texas, on Sunday (local time). Torrential downpours caused the tournament to be reduced to two rounds, and Park, the 2017 Player of the Year and Rookie of the Year, fired an 11-under 131 over those 36 holes to take home $195,000, one stroke better than Lindy Duncan of the United States.

Park followed her first round of 65 with a 66 on Sunday, thanks to five birdies and an eagle against two bogeys. The sophomore now has three LPGA titles.

Park, world No. 5, won twice a year ago, including her first major at the US Women's Open, and ran away with the top rookie honors and the LPGA money title as the only player with more than $2 million in earnings. Park also shared the Player of the Year award with fellow South Korean Ryu So-yeon to become only the second LPGA golfer ever to win the money title, the Rookie of the Year and the Player of the Year honors in one season, joining Nancy Lopez from 1978. 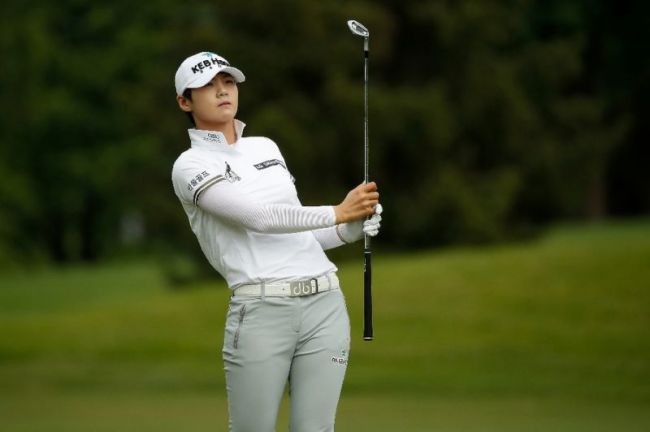 Park Sung-Hyun of South Korea (AFP)
But Park had a slow start to 2018, with only one top-10 in seven tournaments and two missed cuts prior to her win, after not missing any cuts in 23 tournaments last year.

Park began her Sunday with a bogey on the first hole but bounced back with an eagle on the par-5 fourth. She made the turn at 10-under thanks to birdies at the sixth, eighth and ninth.

Park traded a bogey on the 10th with a birdie on the 11th. Following six consecutive pars, Park closed out her tournament with a chip-in birdie on the 18th.

There were more than 30 golfers still on the course by the time Park completed her round, but the closest pursuers were Lindy Duncan and another South Korean, Kim Sei-young, at eight-under, three shots behind Park, with two holes to play. Duncan closed with two consecutive birdies for a 64 but still couldn't catch Park.

Yu Liu of China eagled her penultimate hole, the par-5 eighth, to reach nine-under, and she needed an eagle on the par-4 ninth to force a playoff with Park. She settled for par instead to end alone in third place.